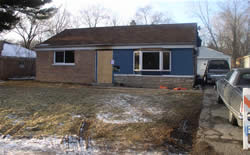 The front door boarded up and sealed, this house on Monee Rd. was the scene of a fire early Friday morning. (Photo: ENEWSPF)

Park Forest, IL–(ENEWSPF)– Police continue to investigate a fire that broke out in the early morning of January 19 left one man dead.

Park Forest police released a statement calling the incident a possible arson/suicide.  Shortly after 1:30 in the morning, police were investigating a report of gun shots in the area of Monee and Western.  Investigating patrol units observed that the single family home located at 8 Monee Rd. was engulfed in flames.

Park Forest Fire Department units responded and suppressed the house fire.  A deceased male white body was located in the living room immediately inside the front door. The Park Forest P.D. Arson Investigation Unit responded and found evidence of accelerants at three separate points of origin throughout the house. The fire does not appear to be accidental.  The State of Illinois Fire Marshall's Office and the Cook County Sheriff's Police Department Crime Scene Unit responded at the request of PFPD Detectives.

The preliminary investigation is showing the incident to be a possible Arson / Suicide.  The deceased is tentatively identified as the sole occupant of that address, a 42 year old white male.  Hand written documents recovered at the scene and interviews with friends of the deceased, are revealing that he was depressed in reference to recent personal struggles.

The remains were transported to the Cook County Medical Examiner's Office for a post mortem examination.    Police stress this information is preliminary information and should not be construed as final.  The Park Forest Police Department Investigations Unit will actively pursue completion of this investigation in the near future.

House Likely to be Demolished

Director of Building, Planning, Zoning & Community Development Larrie Kerestes reported to the village board Saturday that the house will probably have to be demolished, but that determination will be made after the Fire Department has issued its final report.  He indicated that it may be some time before the house is torn down. "We will push it through until we get a resolution," he said,  "This hasn't even started the court process."

As of this writing, the Park Forest Police Department has not yet issued a final report.