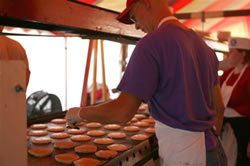 A volunteer works at the Pankatron Saturday. More photographs from this event can be found in the photo gallery. (Photo: Wendy Heise)

Park Forest, IL—(ENEWSPF)— The Kiwanis Club held its 56th annual Pancake Day on Saturday.  The weather was perfect, and volunteers were hard at work at the Pankatron and throughout the great tent feeding everyone who showed up.  Several volunteers, and some of those in attendance, were kind enough to comment on what Pancake Day means to them.

Sylvia Gay has been volunteering for pancake Day for about seven or eight years, and has been attending the event for perhaps 10 or 12 years. She says, "[Pancake Day] helps children in need, which is first priority for the Kiwanis of Park Forest.  We raise money for them.  Second of all, it’s a wonderful community activity.  Everybody gets together.  It looks very successful this year.  All the tables are full, and people are waiting."

Elmer Washington has been helping out about 10 years.  "I do it because it’s a great community event, and one of the things about life, you must keep in touch with your community and the people living there.  Kiwanis provides that opportunity.  Pancake Day is a perfect example of how we bring people together."

When asked about specific events and activities Kiwanis supports, Mr. Washington said Kiwanis supports the three key clubs at the Rich Township high schools.  "We also support St. Luke’s Presbyterian Hospital, Children’s Hospital.  And then there are also the Boy Scouts, Cub Scouts, Girl Scouts — any of the organizations that support young people in the village or in the South Suburbs."

Mike Jordan who owns a business in town, said, “It’s kind of the essence of Park Forest: friends, fellowship, and for a great cause with the Kiwanians.  It’s a real Park Forest institution.  Good chance to see many longtime friends."

Volunteer Diana Cruz said she volunteers because this is a great day for the village.  "It enhances the quality of life for Park Forest."

Burdel Chapman says he attends because it’s a charity event and a good breakfast.  Though he lives in Richton Park, he has attended seven or eight of these breakfasts.

Mr. Calvin Brandon says he attends and volunteers for the community camaraderie.  "It’s a chance to see everybody, get out, work together, and build community relations."  He said he’s attended for about 15 years, and has been volunteering for the last four.

Ted Allen has been volunteering for Pancake Day for about 10 years, “I think there’s a need for this kind of organization.”

LaTonya Burnett said she volunteers because she is a member of the Kiwanis Club, works in Park Forest, “…and I love being active in the community.” Burnett supports Kiwanis, she says, because Kiwanis supports the community. “All of the proceeds after the overhead of the event will go back to the community, to students in the high schools, homeless shelters, various capacities.”

Frank and Janet Kruse were enjoying breakfast along with their son, Tom.  Frank said he is 57 years old, and this is his 56th annual Kiwanis Pancake Day.  "I’ve been here at least 50 of them," he said.  Janet Kruse said she appreciates the good food and good price, "He’s on his third plate," she said, nodding toward her son.  Tom had no comment and continued to eat.

Volunteers said they expect that attendance would match or surpass last year’s total of 4,500 people.
Pictures from the event, from set up to full plates, are available at the eNews Park Forest Photo Gallery .