Limbaugh Spoke for Conservatives During Last Sotomayor Nomination, Too 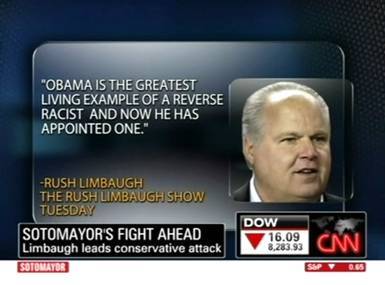 But this is not the first time that Limbaugh has attacked the judge or spoken for other conservatives in denouncing her. According to The New York Times, Limbaugh criticized Sotomayor’s nomination to the 2nd U.S. Circuit Court of Appeals more than a decade ago. The Times reported on June 13, 1998: “On Sept. 30, the day of her confirmation hearing, Rush Limbaugh, the conservative radio talk show host, warned the Senate that Judge Sotomayor was an ultraliberal who was on a ‘rocket ship’ to the Supreme Court. That day, Judge Sotomayor was questioned closely by Republicans.”

Senate Republican staff aides said Trent Lott of Mississippi, the majority leader, has agreed to hold up a vote on the nomination as part of an elaborate political calculus; if she were easily confirmed to the appeals court, they said, that would put her in a position to be named to the Supreme Court. And Senate Republicans think that they would then have a difficult time opposing a Hispanic woman who had just been confirmed by the full Senate.

”Basically, we think that putting her on the appeals court puts her in the batter’s box to be nominated to the Supreme Court,” said one senior Republican staff aide who spoke on the condition of anonymity. ”If Clinton nominated her it would put several of our senators in a real difficult position.”

In its July 6, 1998, issue (accessed via nationalreview.com), the National Review asserted that “Judge Sonia Sotomayor, although liberal, would be particularly difficult to oppose since George Bush appointed her. All the more reason to block her elevation, now pending, to the Second Circuit Court of Appeals.”

On the May 27 broadcast of his nationally syndicated radio show, Limbaugh read from a Hill article that cited the Times, stating, “I had forgotten this. The Hill, Capitol Hill newspaper, recalled that in 1997 I predicted that Sonia Sotomayor was on a ‘rocket ship’ for the US Supreme Court.” He went on to read: “The conservative radio host said, on the day of Sotomayor’s confirmation hearing, September 30, 1997, that she was extremely liberal and was on a ‘rocket ship’ to the high court, according to a 1998 New York Times story on GOP efforts to stop her confirmation.”