Washington, D.C.–(ENEWSPF)– In covering President Obama’s second overseas trip to Europe and the Middle East, the media have used the trip to stoke fears that he may be too close to the Muslim world or harbors a secret, anti-American agenda. For example, on the June 4 edition of his nationally syndicated radio show, Rush Limbaugh stated of Obama’s trip: “[H]e pretty much told them today that he’s one of them, he’s got Muslim roots, he grew up — three different countries with Muslim people, relatives and so forth. Then he says he’s gonna close Guantánamo. ‘We’re gonna stop the torture. I’ve made it unequivocally illegal, and we’re gonna close Guantánamo Bay.’ Of course, that’s — we’re harming ourselves. That’s why they love him.”

This theme follows a series of baseless smears from the presidential campaign intended to stoke fears about Obama’s background and sow suspicions that, as ABC News’ senior White House correspondentJake Tapper noted, Obama was “some sort of Muslim Manchurian candidate,” including that he waseducated in a radical madrassa and that he is a Muslim and not a Christian.

Media Matters for America has identified numerous recent examples of media figures reviving negative references to Obama and Islam, including the following: 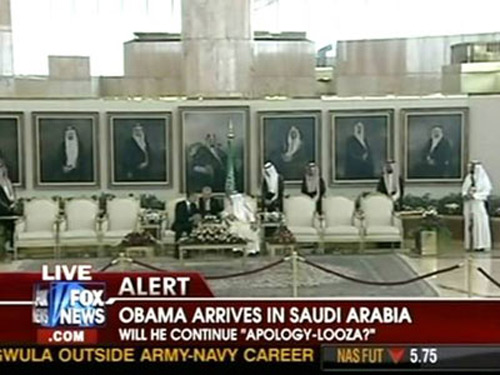 However, at no point did Malkin or the hosts of Fox & Friends note that members of the Bush administration also said there are 7 million American Muslims. For instance, in a January 2007 speech, former Undersecretary of State Karen Hughes said: “As a government official, I represent an estimated 7 million American Muslims who live and work and worship side by side with us here in this great country.” Hughes repeated the 7 million figure in numerous other speeches. Neither Malkin nor the hosts of Fox & Friends gave any indication that they had criticized the Bush administration for using the same figure.

Further, a 2001 State Department fact sheet on “Islam in the United States” said: “While there are no official population figures for religious affiliation in the United States, experts estimate that there are approximately six million American Muslims. Other estimates range from four to eight million.” A footnote stated of the figure: “Estimates vary widely for all the figures quoted throughout this fact sheet. In terms of overall population, M.M. Ali reports that there are 6 to 8 million Muslims in America in The Washington Report on Middle East Affairs, May-June 1996, p. 13.” 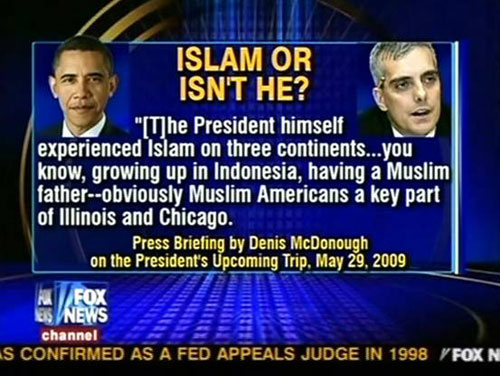 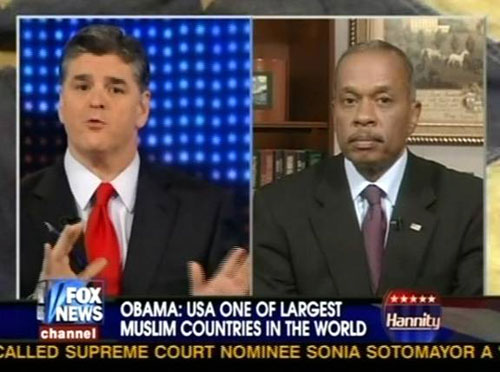 From the June 4 edition of Premiere Radio Networks’ The Rush Limbaugh Show:

LIMBAUGH: So Obama gets to go over there and say 9-11 was traumatic, but, you know, it led us to act contrary to our traditions and our ideals — what the hell is he talking about? Well, in his mind, two things: the Iraq War and Guantánamo Bay. So he’s dumping on Bush again, he’s blaming his predecessor, and he’s siding with the — with Islam and with Muslims that they are justified in their attitudes of anger toward the United States.

But now, of course, he, the Messiah, has arrived, and it’s all going to be different now. He had the audacity to say, “I have unequivocally prohibited the use of torture by the United States.” Ladies and gentleman, torture in the United States has always been illegal. There is nothing Barack Obama has done to change that. If it was legal and Obama has made it illegal, then why does the Obama Justice Department want to prosecute Bush lawyers for writing opinions suggesting that waterboarding would not be torture, because the intent was not to torture, it was to glean information?

So he is telling the Muslim world that he has ended torture. The implication is that that’s all we have ever been is torturers, rapists, murders, pillagers. This is why they love him. Plus, he’s — he pretty much told them today that he’s one of them, he’s got Muslim roots, he grew up — three different countries with Muslim people, relatives and so forth. Then he says he’s gonna close Guantánamo. “We’re gonna stop the torture. I’ve made it unequivocally illegal, and we’re gonna close Guantánamo Bay.” Of course, that’s — we’re harming ourselves. That’s why they love him.

From the June 4 edition of Fox News’ Fox & Friends:

MALKIN: Well, I’d like to say something positive about it, and I think that he has learned from his European and past apology tour appearances not to make the America-bashing so explicit. And so there was — I don’t know if it was grudging or if it was obligatory — but there was at least some tip of the hat to the fact that Muslims who live in America, for example, enjoy unparalleled freedoms.

Although I will note that even there, in the sound bite that he gave about American Muslims, that there was some inflation — the same kind of population inflation that he engaged in yesterday when he said that the U.S. would have been one of the largest Muslim countries in the world. He said that there were 7 million Muslims living in the country, and I think by any accurate account that that is not true. And so —

KILMEADE: Right, you want to hear it, Michelle?

KILMEADE: Let’s hear it. In case you just woke —

MALKIN: Let’s have people hear it.

KILMEADE: Right. In case you just woke up, here’s how it sounded less than an hour ago.

OBAMA : Opportunity for all people has not come true for everyone in America, but its promise exists for all who come to our shores — and that includes nearly 7 million American Muslims in our country today who, by the way, enjoy incomes and educational levels that are higher than the American average.

KILMEADE: So — so, there you go. That’s an inflation of numbers.

From the June 3 edition of Fox News’ Hannity:

HANNITY: And tonight in “Your America,” President Obama continues to turn his back on many of the Christian ideals that this country was founded on. Now we’ve told you extensively about the company that he likes to keep — you know, like Reverend Jeremiah Wright. We reported on how his staffers chose to cover a cross before a speech that he delivered at Georgetown University. And remember on the first leg of his worldwide apology tour back in April when President Obama said this to an audience of captivated reporters.

OBAMA : We do not consider ourselves a Christian nation.

HANNITY: Well, just before he kicked off round two of his apology tour, he sat down with a reporter from French TV to talk about the goals that he had on this upcoming trip. Now, take a listen, and keep in mind that you’re gonna hear a translator, as this aired on French television.

OBAMA : One of the points I want to make is that if you actually took the number of Muslims Americans, you know, we’d be one of the largest Muslim countries in the world.

HANNITY: All right. So we’re not a Christian nation, but we’re a Muslim nation?