Washington, D.C.–(ENEWSPF)– The media are outraged at the “class warfare” supposedly present in President Obama’s budget plans. In the past few days alone, Michelle Bernard said Barack Obama “was almost declaring class warfare” in his speech to Congress; CNBC’s Carlos Quintanilla said, “I don’t want to call it class warfare, although that’s what it may end up being in the end, this debate over wealth redistribution”; the AP’s Jennifer Loven asked White House press secretary Robert Gibbs, “Are you all worried at all that that kind of argument, that ‘class warfare’ argument could sink the ability to get some of these big priorities through?” Politico ran a Jeanne Cummings article headlined “Class warfare returns to D.C.” And this afternoon, MSNBC joined the pile-on, with a segment asking: “Is there a war against the wealthy? Do we have a class war developing?” 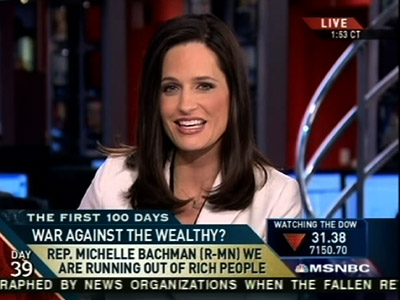 What sparked this sudden concern about “class warfare”? President Obama indicated that in order to fund things like health care, the very wealthiest Americans (individuals who make more than $200,000 and families making more than $250,000) might have to pay slightly more in taxes, via the expiration of President Bush’s tax cuts for those earners. Under this plan, the wealthiest Americans (again, those making more than $200,000) would be subject to the same income tax rate they paid in the 1990s — when, it should be remembered, the rich got richer and the economy did quite well.

If this plan — raising taxes slightly on people who make more than $200,000 a year in order to pay for things like health care for people who don’t — sounds familiar, it’s because Obama campaigned on it for roughly two years. Conservatives, amplified by the news media, ridiculed it with labels like “socialism” and “class warfare” and used all kinds of scary rhetoric. And the American people voted for it anyway.

So it’s a bit odd to see all this media angst over the idea that Barack Obama’s plans to do something he said he would do — and something the American public supported.

Cummings’ Politico article is the oddest of all, promoting the “class warfare” theme with a series of misguided and nonsensical grievances. She began by complaining, essentially, of being insufficiently surprised by Obama’s plans:

Obama’s creative juices seemed to run dry as he turned Thursday to his party’s most predictable revenue enhancer: taxing the wealthy.

The result: an instant revival of an old and predictable Washington debate.

It’s too bad this bores Cummings so badly, but somehow I doubt that either Barack Obama or the American people consider “keeping Jeanne Cummings on the edge of her seat” among their top priorities.

Instead, most people probably want to know more basic things about Obama’s plans: how they will be affected, whether it will work, what the gains will be, and at what cost. Sadly, despite writing more than 1,000 words, Cummings never comes close to answering any of those questions — or even, really, to trying.

Instead, she opined that Obama’s proposals brought “reminders of how fresh Obama’s gains are and how fleeting they could become if he loses the aura of bringing a new style of leadership to the White House.” It isn’t particularly clear what that means, though presumably if Obama accomplishes universal health care and gets the economy moving, few will care about his “style” in doing so.

Instead, Cummings continued to emphasize her boredom: “[N]o amount of spin or recalibration could fuzz up the flashback to previous Democratic administration’s fiscal policy when Obama unveiled his spending plan.”

Now, first of all, she hadn’t identified any misleading “spin” previously, so that word is just tossed in as an unsubstantiated pejorative. But more importantly: Why does the “flashback” to Bill Clinton’s fiscal policy need “fuzzing up”? It was, after all, rather more successful than the fiscal policies that followed. Cummings, of course, doesn’t address the efficacy of that policy; she just complains that it isn’t new and exciting. Well, fine, but few economists think the goal of fiscal policy should be to entertain Politico reporters.

Cummings’ article actually got worse from there. Take, for example, this passage:

Some economists argue that the anticipation of a return to higher tax rates may be enough to thwart critical investments and purchases.

For instance, the White House has been working for months to get the nation’s banks to begin lending again and Treasury Secretary Timothy Geithner recently announced a new government program aimed at getting loans to small business and to car and house buyers.

And who are the people out there today with the cash — and confidence — to spend? Most often they are people and families with earnings ranked in the top echelons and who will be subject to the Obama tax hike.

It may be true that “some economists” argue that taxing people who make more than $200,000 at the rate at which they were taxed during the 1990s boom “may” thwart investments and spending. But Cummings doesn’t tell us who these economists are or quote their arguments in any way. Nor does she tell us if this is a mainstream view among economists, or a fringe view. Nor does she offer the counterargument.

Though her next paragraph begins with the words “for instance,” it doesn’t actually provide an “instance” of the assertion that comes before it. And the third paragraph suggests that the key to economic stimulus is keeping money in the hands of the wealthy so they can spend it. This runs counter to the widely held view that the way to jump-start the economy is to ensure that the poor and middle class have money to spend — because unlike the wealthy, who have enough money to both spend and save, the poor and middle class will actually spend it. That’s why economists like Mark Zandi — an adviser to John McCain’s campaign, not a knee-jerk liberal — say that things like food stamps and unemployment benefits are more stimulative than tax cuts.

But none of those basic facts make an appearance in Cummings’ article; instead, she offers poorly considered platitudes on behalf of the wealthy.

Speaking of “the wealthy,” Cummings doesn’t bother to tell us who they are. She refers to “the wealthy” and “wealthy earners” and “people and families with earnings ranked in the top echelons” and “wealthy households,” but never tells us what “wealthy” means. It means people who make more than $200,000. It is important to spell that out: A Time poll in 2000 found that 19 percent of Americans thought they were among the richest one percent of Americans, and another 20 percent expected they would get there one day. News reports that refer simply to tax increases on “the wealthy” or even “the richest 1 percent” don’t really inform; they confuse. They lead large numbers of readers to incorrectly believe they will be subject to tax increases.

(At this point, it should be noted that big-name political reporters earn considerably more money than most of the people who read and watch their reports. According to Sean Quinn at FiveThirtyEight.com, one reporter asked after Gibbs’ briefing yesterday: “Did you notice all the questions about taxes came from reporters making over $250,000 a year, especially the TV guys?”)

Warren Buffett, who knows a thing or two about wealth, has noted that because of the way the tax code is structured, he effectively pays taxes at a lower rate than the secretaries who work for him, concluding: “There’s class warfare, all right. But it’s my class, the rich class, that’s making war, and we’re winning.”

One reason they’re winning is that the news media do not use the loaded phrases “class warfare” and “redistribution of wealth” to describe things like the Bush tax cuts for the wealthy, or the home mortgage deduction (which favors those who are wealthy enough to buy homes over those who are not) or countless other policies that benefit wealthier Americans at the expense of those who are less fortunate. Instead, the media pretend this is a one-sided war — as though the wealthy are being unfairly assaulted by an army of bullying waitresses and janitors and farmers and teachers.

Another reason is articles like today’s Washington Post front-pager. The Post tells us in paragraph one that Obama plans to raise taxes on the wealthy and waits until paragraph 18 to reveal that he plans to make permanent a tax credit for low- and middle-income workers. A tax increase that applies to almost nobody — that leads the article. A tax credit that applies to much of the nation’s workforce? Buried 18 paragraphs in.

And like this Los Angeles Times article, which announces near the beginning that Obama’s budget “would raise taxes, redistribute income, spend more on social programs than on defense” and quotes House Republican leader John Boehner saying, “The era of big government is back, and Democrats are asking you to pay for it” — without making clear that this is true only if you are among the very small number of very wealthy people whose taxes would go up. In the process, the Times twice refers to income “redistribution” and quotes another Republican congressman invoking the specter of “class warfare.”

They’re winning, in large part, because they have the media on their side.