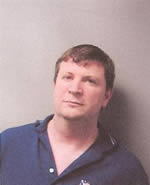 On Saturday, March 17, 2007, the Park Forest Police Department was notified by a northwest suburban Police Department that a twelve year old female was missing from her home and thought to be in the company of a forty-two year old family friend.  The Park Forest Police went to the Central Park address but there was no answer at the door.  It was later learned that Anderson had driven the young girl home.  The girl’s mother brought her daughter to a local hospital for an exam, where her daughter admitted to medical personnel that she has an ongoing sexual relationship with the older man.

The release says that Donald Anderson allegedly gave statements to Police that he had sex with the child, on at least three occasions in his Park Forest home.

According to the release, Wednesday morning Park Forest Police Department detectives executed a search warrant of Anderson’s home.  Computers and additional items were seized in an attempt to locate further evidence of the crime, including digital computer images.  Park Forest Police have requested technical assistance from the Federal Bureau of Investigation’s Cyber Crime/ Child Exploitation Unit with evidence recovered from the computer.