Park Forest, IL-(ENEWSPF)- Established in 1978, the Park Forest Running and Pancake Club (PFRPC) is based in the South Suburbs of Chicago. While the club originated in the far south community of Park Forest, today our members come from more than 25 different communities throughout metropolitan Chicago, as well as Northwest Indiana.

Far from a fair-weather organization, the PFRPC is active all year long, literally — rain or shine, snow or sleet, heat or humidity — sponsoring races, weekend recreational runs, speed workouts, training runs, Moon Runs, road trips and just plain social get-togethers. It doesn’t matter whether you’re a walker, a 7-minute miler, 12-minute miler or a world class runner (we have them all in the club), all are welcomed by the PFRPC.

The Park Forest Running and Pancake Club is a group dedicated to fitness through running, fun, and friendship. We welcome and actively include runners and walkers of all speeds and levels. In order to accomplish this we run together, provide each other with encouragement, and help each other achieve our running and fitness goals. 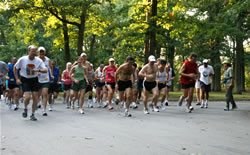 Runners and Walkers of All Ages and Abilities Are Welcome

Park Forest, IL–(ENEWSPF)– Why do a Half-Marathon in less than a day when you can run one progressively over the course of a month? How? Run or walk your Half-Marathon on the Park Forest Running and Pancake Club’s Progressive plan.

The PFRPC is preparing for its Progressive Half Marathon, running on select Tuesdays and Sundays in August. The race winds through the Forest Preserve in Park Forest, beginning in the Sauk Trial Woods Central parking lot off Ashland Avenue, Grove #7.

The Progressive Half Marathon consists of two 4.0547 miles legs and the Park Forest Scenic 5-mile race on Labor Day, September 7. Runners have five dates to choose from to run their two required legs for the Progressive-Half. Want to run them all? The more the merrier. The PFRPC will take your two best times and add them to your time at the Park Forest Scenic 5 to determine your Half-Marathon time. Should a participant complete more than two legs of the Progressive Half-Marathon, the club will take the two best times and combine them with the official time from the Scenic 5 on Labor Day for the official half-marathon time. These two short legs combined with the 5-mile race on Labor Day will result in a half-marathon distance of 13.1 miles.

Park Forest resident George Stapleton says he enjoys the ability to run in multiple races, ” “The Progressive Half-Marathon makes it possible for a runner, if he or she wishes, to run 5 races within a little over a month for only $49, less than $10 a race!”

Club member Margaret Brady likes the Progressive Half-Marathon for training and getting to know other runners, “Training: With a capital ‘T.’ The four-mile loop is hilly and challenging – a great training route. It’s a fun and interesting trail – never boring. Watch for deer! The club members manning the start/finish line, water stations and all along the course are the best. There’s no one more supportive than a fellow runner … especially when you’re drenched in sweat in mid-August humidity. No matter how slow I go, the folks on the sidelines make me feel like a star!”

Margaret is approaching 30 years as a member of the PFRPC.

Club president Fred Mazurski says this race is one-of-a-kind, “The concept of the Progressive Marathon and Progressive Half Marathon is unique to the PFRPC. To my knowledge, there is no other event like this in the U.S.”

Mazurski says the primary reason for it’s uniqueness is the time and effort required by the many volunteers to not only help set up one race, but a total of four races (each one of the 4 miles ‘legs’) in August, “In addition to the four legs, each participant will also run in the PF Scenic 5 and will be able to partake of great food at our awards picnic after Labor Day.”

“The Progressive Half simply represents the best deal in town.”

The club offers $1 discounts for entries received before July 26, plus a $3 discount for current PFRPC members. New PFRPC members will receive a $5 discount. You can join the club online at PFRPC.COM.

Registration is available online or by sending in this application. Questions? Email John Kotash at [email protected]

More information is available on the club’s Web site: http://www.pfrpc.com. 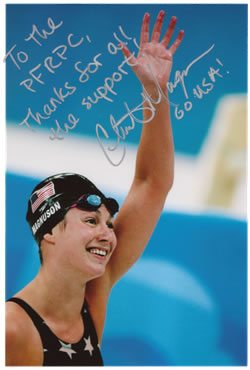 Members of the Park Forest Running and Pancake Club had the unique opportunity to support an Olympian. Club member Christine Magnuson earned two silver medals at the Summer Olympics in Beijing, China.

The trip, however, was not free.

When club members learned that Beijing hotel rooms ran in excess of $1000 a night, the club decided to help with a donation. Club members authorized a $500 donation to the Magnuson family.

Christine’s parents, Geri and Bill Magnuson, are also members of the PFRPC.

Club president Fred Mazurski expressed his pride in Christine’s accomplishments, “PFRPC is extremely proud of club member Christine Magnuson for her achievement of two silver medals at the Beijing Olympics. Congrats to Christine on her world class achievement.”