Salt of the Earth Comes at High Price This Year 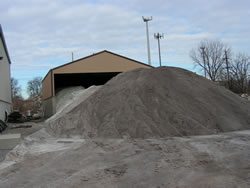 Park Forest, IL–(ENEWSPF)– Director of Public Works Ken Eyer shared the brackish news with board members at Saturday’s Rules Meeting: road salt is at a premium this season, and scarce.

The harsh winter has necessitated Public Works using over 1,000 tons of salt this year so far.

“I’ve taken delivery of 1,600 of our 1,800 tons of salt,” Director Eyer told board members. Taking the advance delivery should help the Village avoid a situation like the one last year when the supplier ran out of salt, “Our contract was valid, but we couldn’t get [salt].”

“This is a high amount of salt. We don’t usually use this amount at all,” Eyer said, “We’ve used a season already in salt because of the ice storms.”

“I was worried until December hit that we were going to have too much salt,” Eyer said.

Eyer said cost is a factor. When budgeting for this year’s allotment of road salt, Eyer said he anticipated a “30% increase or decrease” in cost.

This represents a 400% increase over last year’s prices when the Village of Park Forest paid roughly $39 for a ton for road salt, according to Eyer.

“I did budget for an increase, but nowhere near that amount,” Eyer said.

Eyer has an informational item he will present to board members at Monday’s Rules Meeting. According to the memo, “The Village had about 300 tons in storage from last season and was able to secure 1,800 tons of salt for this winter season. Currently DPW has received delivery of 1,600 tons and has about 700 tons in stock. The Department of Public Works (DPW) has 200 tons left to order to complete its salt contract. Once this order is delivered, DPW will not have access to any addition salt off this contract.”

DPW estimates that for the month of December, 1,200 tons of salt were used on Village streets. Staff has concerns that if the weather continues to be harsh with many storms there will be insufficient salt to maintain clear streets to the “bare pavement policy” that DPW currently follows. Several options in the weeks ahead include:

“This, by far, exceeded the budgeted amount,” Eyer concludes his memo. “The reason for the increase in salt prices is caused by a short supply.”

Saturday Rules Meetings are held the first Saturday of each month. Meetings begin at 10 a.m. and generally last until noon and the agenda is open. Members of the public can attend and ask questions, make comments, or join the discussion in a less formal setting. Meetings may adjourn any time after 11:00 a.m. if there are no members of the public in attendance, or if there are no more issues or concerns presented to the board. The writer is a Park Forest Village Trustee.