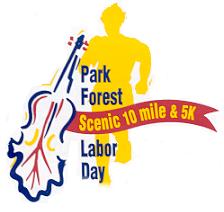 According to a recent press release from the Village of Park Forest, Village officials may decide the future of the 29-year-old Park Forest Scenic 10 mile race before the end of the year.  However, no final decision has been reached on the future of the popular Labor Day event.  Faced with both a lack of sponsors and rising costs, the Village Board of Trustees will discuss the prospect of continuing to support the Scenic 10 in November.  If a decision is made to end the race, the 30th running of the Scenic 10, on September 3, 2007, will be its last.

Through the years, the Scenic 10 has won accolades from both runners and race groups.  In 15 of the last 16 years, the Chicago Area Runners Association has selected the Scenic 10 as the top road race in the Chicago area.  That honor is based primarily from comments by race participants.

Village Mayor John A. Ostenburg said that the future of the race was a matter of concern. "At our recent budget review session, we were advised that support for the race has been slipping over the last few years on two different fronts. It has become increasingly difficult to find sponsors to finance the event, and the number of participants has diminished,” said Ostenburg.

"The Board has decided to give the Scenic 10 a comprehensive review and then make a decision on where to go,” Ostenburg said. “Next year is the 30th annual event, and that certainly would be a good finale to the race if we decide to go that route. I believe all the Board members hold the feeling that it always is better to go out on a high note. Our discussions will be open and the ultimate decision will come in the form of formal Board action."

The Board of Trustees first discussed the future of the Scenic 10 at a strategic planning session in the fall of 2005 and again over the weekend at a financial update meeting. No action was taken at either time.

Although the race’s future had not yet been determined, a Monday evening email message from Race Director Bud James claimed the 2007 run would be the last, saying that the Village of Park Forest has decided to end the race.

In his email, James, the Race Director for the last 20 years, said the race “set the standard for many races in Illinois and throughout the U.S.   The competitive level of the race has been among the to 10 mile races in the world.”

James noted that the Park Forest race was among the first to offer prize money for athletes with more than $350,000 being awarded since 1986.

This year’s race, run in a steady drizzle, produced the fastest times ever run and among the best in the world at that distance.  Nelson Kiplagat of Kenya won the Men’s Division in record time of 46:30, 21 seconds better than the old record.  Asmae Leghzaoui of Russia was the best female runner with her time of 52:40 shattering the previous mark by 38 seconds.

Reached by phone for comment, Village Manager Tom Mick said that, while the board did discuss the future of the Scenic 10, no official action has yet been taken.  "I would expect that no official action will be taken until January 2007."  Referring to any who might wish to express their views on the potential last run of the Scenic 10, Mick said, "You are encouraged to write a letter, send an email, or come to a board meeting,"