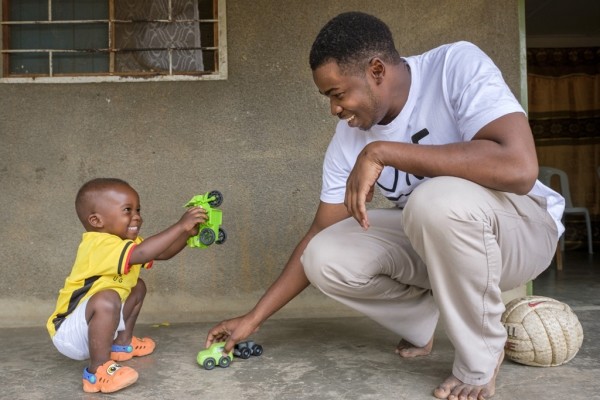 A physiotherapist from Lira, Uganda, plays with his 22-month-old son outside their residence at a hospital compound in Napak, Karamoja, eastern Uganda. Photo: UNICEF/Ose

NEW YORK–(ENEWSPF)–16 June 2017 – A majority of children aged between three- and four-years-old in 74 countries, or about 40 million, have fathers who do not play or engage in early learning activities with them, according to a new study released today by the United Nations Children’s Fund (UNICEF).

“What these numbers show us is that father’s are struggling to play an active role in their children’s early years,” said Laurence Chandy, UNICEF Director of Data, Research and Policy, in a statement on the study, released as some 80 countries around the world are set to celebrate Father’s Day this coming Sunday.

“We must break down the barriers that prevent fathers from providing their babies and young children a conducive environment for them to thrive, including love, play, protection and nutritious food,” he said.

The UNICEF analysis examined whether children aged three and four engaged in any play and early learning activities with their fathers, such as having their father read to the children, tell them stories or sing with them; taking them outside, playing with them; and naming, counting or drawing with them.

UNICEF urges governments and the private sector to increase spending and influence policies to support early childhood development programmes that focus on providing parents with the resources and information they need to provide nurturing care to their children.

“We must ensure that all parents have the time, resources and knowledge they need to fully support their children’s early development,” Mr. Chandy said.

Advances in neuroscience have proven that when children spend their earliest years in a nurturing, stimulating environment, new neural connections can form at a once-in-a-lifetime speed of 1,000 per second. These connections help determine their health, ability to learn and deal with stress, and even influence their earning capacity as adults.

Research also suggests that exposure to violence and a lack of stimulation and care can prevent neural connections from occurring; and when children positively interact with their fathers, they have better psychological health, self-esteem and life-satisfaction in the long-term.

This month, UNICEF is inviting families to post photos and videos of what it takes to be ‘super dads,’ using the hashtag #EarlyMomentsMatter on their Instagram and Twitter accounts.

Photos and videos of UNICEF ambassadors and supporters who have got behind the campaign are being posted on UNICEF’s Instagram and Twitter, and featured on the campaign’s gallery, to inspire families across the world to share their ‘super dads’ moments.