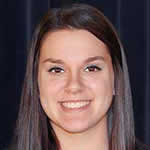 In four appearances last week for the Bulldogs, Cox went 2-1 and racked up 33 strikeouts in 22 innings pitched. Cox delivered a complete-game shutout against DIII (#2) Rock Valley College, giving up only two hits while striking out 12 in South Suburban’s 2-0 victory. The freshman closed out the week with six shutout innings and nine strikeouts in an 8-0 win over Carl Sandburg College. On the season, Cox boasts a team-low 2.67 ERA and a team-high 53 strikeouts.