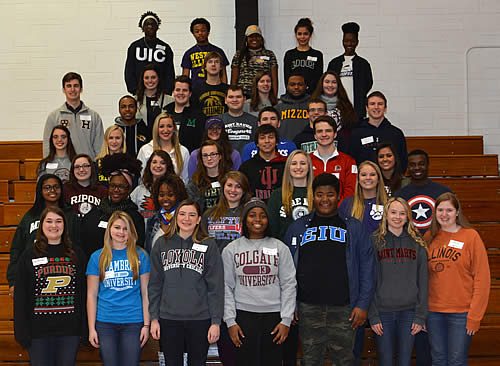 The current Marian Catholic students had the opportunity to ask and get a feeling for what the next step entails.  Questions ranged from, “Have you ever had the urge of coming home?” to “Did you feel that Marian prepared you going into college?”  All questions were answered with great integrity to ease the minds of current students about entering college.

Due to the weather, the original scheduled date was forced to be moved because of school cancellations and the young alums continued to show support with their attendance at the event. “It’s always great to see all the kids come back to school.  It’s a true testament to Marian Catholic when recent grads are continuing to show interest considering the recent weather issues,” Vince Krydynski ’81, Vice President of Institutional Advancement said. Recent alums were split into groups of three or four in classrooms.

“Coming back to Marian makes me feel at home,” said Sophia Sesto ’14, Texas Christian University.  “This is where I was taught so much, it was Marian Catholic that prepared me for what I currently encounter on a daily basis.”