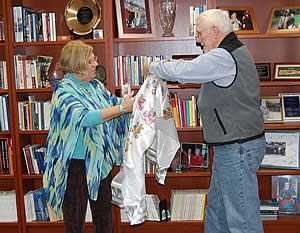 “We appreciate Dr. Carlson’s presentation of these special gifts with the blessings of the Dalai Lama.” said Dr. Maimon.  Psychology students, including our first class of doctoral candidates, benefit from Dr. Carlson’s global experiences and reputation.”

Carlson has been a member of the GSU psychology and counseling faculty since 1971. He currently teaches graduate classes in counseling. Since 1995, he has hosted and produced over 300 professional and trade videos mostly for the American Psychological Association (APA). These programs are with leading professional therapists and educators and are used in most universities around the world. In 2004 the American Counseling Association named him a “Living Legend.” In 2009 the Division of Psychotherapy of the American Psychological Association (APA) named him “Distinguished Psychologist” for his life contribution to psychotherapy and in 2011 he will receive the APA Distinguished Contribution to Education and Training Award. He has received similar awards from four other professional organizations.

He has published 55 books. Carlson’s next publication, “Never Be Lonely Again,” is scheduled for national release on February 1, 2011. The book details how he and co-author Dr. Pat Love learned how to recognize and treat loneliness on a trip to meet with the Dalai Lama in 2004.

In January, Carlson will return to Thailand for the eleventh year in a row where he will again provide training to medical schools and health agencies throughout the nation. He will also launch a nation-wide parent education program based on his previous teachings.