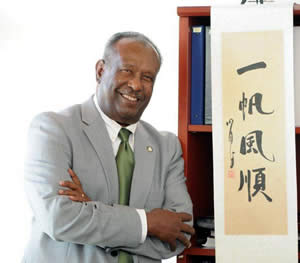 University Park, IL-(ENEWSPF)- Dr. Gebeyehu Ejigu, Executive Vice President and Chief of Staff at Governors State University, has been selected for a Fulbright Specialists project in China at South China Normal University during the Fall 2012 semester, according to the United States Department of State and the J. William Fulbright Foreign Scholarship Board.

Dr. Ejigu will present lectures and workshops designed to cover the structure, governance, financing, organization and management of the United States educational system at all levels — K-12 and postsecondary institutions at the two-and four-year levels, both public and private.

“I am delighted that the Fulbright Program has recognized Dr. Ejigu’s numerous contributions to higher education with the award of this highly competitive grant,” said GSU President Elaine P. Maimon. “Students, faculty members, and staff at South China Normal University will benefit from the wisdom Dr. Ejigu has attained from decades of creative achievements at U. S. universities. He will also strengthen Governors State University’s alliance with South China Normal and with other Chinese universities.

“As a scholar, Dr. Ejigu will also learn a great deal from his hosts—insights that will strengthen GSU’s commitment to prepare students for success in a global society. All of us at GSU are thrilled that the Fulbright Program has recognized Dr. Ejigu’s contributions and capabilities.”

Dr. Ejigu is one of over 400 U.S. faculty and professionals who will travel abroad this year through the Fulbright Specialists Program. The Fulbright Specialists Program, created in 2000 to complement the traditional Fulbright Scholar Program, provides short-term academic opportunities (two to six weeks) to prominent U.S. faculty and professionals to support curricular and faculty development and institutional planning at post-secondary, academic institutions around the world.

The Fulbright Program, America’s flagship international educational exchange activity, is sponsored by the U.S. Department of State, Bureau of Educational and Cultural Affairs. Over its 60 years of existence, thousands of U.S. faculty and professionals have taught, studied, or conducted research abroad, and thousands of their counterparts from other countries have engaged in similar activities in the United States. More than 285,000 emerging leaders in their professional fields have received Fulbright awards, including individuals who later became heads of government, Nobel Prize winners, and leaders in education, business, journalism, the arts and other fields.