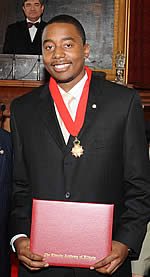 University Park, IL–(ENEWSPF)– Each year an outstanding senior from each of the four-year degree granting institutions of higher learning in Illinois is named a Student Laureate of The Lincoln Academy of Illinois.

This year’s Lincoln Laureate from Governors State University is Adam Taylor of Matteson. According to those who nominated him, Taylor exemplifies the characteristics of Lincoln Laureates who are chosen for their commitment to the principles of democracy and humanity as embodied by Abraham Lincoln. Taylor has been an active and contributing member of the GSU community through his work as president of the Student Senate, participant in the Brother 2 Brother program, and member of the Black Student Union. As a student at GSU, he has worked as a Student Life assistant helping plan and implement student activities on campus.

The Lincoln Academy of Illinois established the award in 1965. Each recipient receives the Student Laureate Medallion and a certificate of achievement. Taylor and other award recipients recently participated in a ceremony in Springfield, in the Old State Capitol. A luncheon honoring the recipients was held in the Executive Mansion following the ceremony.

“I was not expecting to be nominated for this award. To have people nominate me is pretty amazing. I am thankful to be able to help others and be involved at GSU the way I have been,” said Taylor.

Taylor will graduate with a bachelor’s degree in mathematics with teacher certification and will student teach at Collin Powell Middle School in Matteson next year.

“I have always been good at math and enjoyed helping people,” said Taylor. “Math is a subject people love to hate so I can combine the two and make it easier for students to understand and like math.”