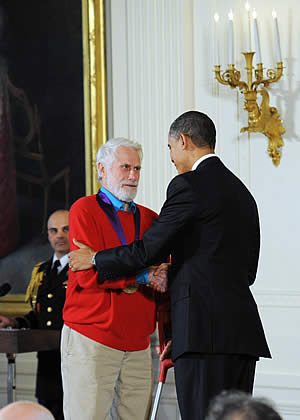 President Barack Obama presented the award to di Suvero, whose “Yes! For Lady Day” is a towering masterwork at the Nathan Manilow Sculpture Park at Governors State University. Di Suvero was one of 10 recipients of the this year’s award; other honorees  include author Harper Lee, actress Meryl Streep, jazz musician Sonny Rollins, and singer James Taylor.

The National Medal of Arts is a White House initiative managed by the National Endowment for the Arts. Each year, the NEA organizes and oversees the medal nomination process and notifies artists of their selection to receive a medal, the nation’s highest honor for artistic excellence.

NEA Chairman Rocco Landesman said the National Medal of Arts recipients represent the many vibrant and diverse art forms thriving in America, and that di Suvero is worthy of the honor.

“One of the most prominent American artists to emerge from the Abstract Expressionist era, Mark di Suvero’s monumental steel sculptures have been exhibited throughout the world,” Landesman said. “I join the president and the country in saluting him.”

Di Suvero was born in China to parents serving in the Italian diplomatic corps. After the Japanese invasion of China in World War II, he and his parents fled to San Francisco. As a young artist, he gravitated to abstract sculpture and began creating oversized works from cast-off construction materials.

“Yes! For Lady Day” was created over a period of two summers in 1968 and 1969 while di Suvero lived in a farmhouse on what was to become the Governors State University campus. The house was loaned by Chicago art collector and philanthropist Lewis Manilow, and became a gathering place for local artists.

The monumental sculpture was constructed of salvaged steel I-beams and a railroad tank car that was cut at a diagonal ellipse by di Suvero. “Yes! For Lady Day,” a tribute to jazz singer Billie Holliday, is notable for reflecting both the gritty realism of America’s industrial age and the beauty of the Illinois prairie landscape.