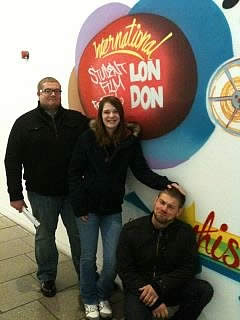 “Careless,” was among more than 80 films screened at the festival. It was selected from a pool of more than 350 submissions. Blake Labriola of Park Forest developed the concept for the suspense thriller in a class. It was filmed and edited with the assistance of fellow students Leah Shortell-Chapman of Steger and Josh Young of Park Forest.

Labriola and Shortell-Chapman are currently students in the Master of Fine Arts program and Young recently graduated from GSU with his Bachelor of Arts in Communications with a concentration in Filmmaking & Multimedia. Keisha Dyson, adjunct professor and program developer for the GSU cable station, accompanied the student filmmakers.

“It has been one of the most enriching cultural and film experiences that I’ve been able to take part in,” said Labriola. “Showing my film to students from around the world was an exciting event for me.”

The students were also able to watch dozens of short films, meet student filmmakers from around the globe, visit the largest archive of world-renowned film director Stanley Kubrick’s production material, and tour the BBC.

“This trip was amazing! I was impressed with the quality of student work and very proud to be among such an elite group,” added Shortell-Chapman,

“It was a pretty bold move to enter an international film festival. We are very proud of Blake,” said Dyson. “Experiences like this–particularly for aspiring storytellers — can deepen their knowledge of culture and history. It adds perspective and creates balance, which are key elements to great storytelling.”