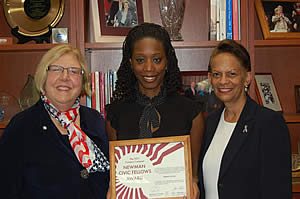 University Park, IL-(ENEWSPF)- In addition to recently earning her Bachelor’s in Social Work from Governors State University, Tamara Lewis of Chicago was also awarded the Newman Civic Fellows Award. Lewis received the honor from the Campus Compact, an organization of colleges and universities dedicated tofurthering campus service and service-learning in higher education.

The Newman Civic Fellows Award honors college students whose actions demonstrate their role as public problem solvers and civic leaders. Newman Civic Fellows are nominated by college and university presidents. Lewis was nominated by GSU president, Dr. Elaine P. Maimon for her efforts to raise money for victims of the 2010 earthquake in Haiti and her outstanding achievements as a student.

“As a student, Tamara demonstrates enthusiasm for academic excellence and genuine concern for addressing social disparities within impoverished communities,” said Dr. Maimon. “She is passionate about social justice and desires to empower people and communities.”

Lewis was the central force behind “All Nations for Haiti,” a fashion show held at GSU, which featured the styles from all over the world. The show raised $4,400 for Haitian relief efforts.

“I was driven to help the people of Haiti because I saw a need,” said Tamara. “I learned how to work with students from other cultures and countries and with faculty to achieve our goal and raise money. It was a great learning experience.”