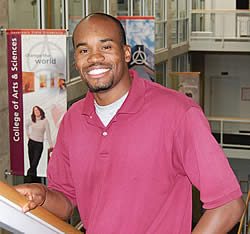 University Park, IL–(ENEWSPF)– This week, Eddie Rogers II, is learning 3 new songs that he’ll perform at a music competition May 15 and 16 in California.

That’s daunting enough for any singer. Since the 3 songs are in Chinese, however, Rogers’ task is especially challenging. Chinese is not his native language, and he has never visited China.

Rogers, of Oak Forest, will travel to Los Angeles next week to compete in the North American finals of “2010 Superboy,” a singing competition sponsored by China’s Hunan TV network. The competition, a search for new male singing talent, is sometimes called the Chinese equivalent of “American Idol,” only in the world’s most populous country.

Four of 70 North American contestants will travel to China this summer for the final rounds of “2010 Superboy.” Rogers qualified for the North American finals at a regional competition last month in Chicago’s Chinatown neighborhood.

Rogers has been singing Chinese songs around the Chicago area for 10 years. He appears a couple of times a year at Chinese-American benefits and other black-tie affairs. This year, he played a small part in a Chinese opera. Those appearances, he says, were strictly for fun. He has a day job as a career counselor for disabled adults at Cornerstone Services in Joliet, and is a mathematics major at Governors State University

“But now it’s getting exciting,” he says. “This could open up some real possibilities for me. I hope to build some momentum, and sing my way to China.”

Dr. Shenseng Zhao, Professor of Computer Science at GSU, who last year taught Rogers discrete math, is a big fan. He says Rogers’ singing surprised him, and made him proud that he is a GSU student. Rogers sang a Chinese song in class at the end of his term with Dr. Zhao. “Eddie is the first GSU American student who has the ability and talent to cross the barriers between east and west,” Dr. Zhao says.

Rogers started singing in Chinese in the late 1990s, while a student at North Central College. He took a class in Chinese and his teacher suggested that the students learn a song. Later, she recommended him for his first singing appearance before a Chinese-American association in the Western suburbs. As a singer, he’s won praise for his command of a language in which tones – similar to notes on a musical scale – need to be mastered.

Many Chinese speakers find it remarkable that an American is able to perform in their language, Rogers says. “I know that they like my command of the language,” he says. “When I perform next week, I also want to be recognized for my singing ability.”