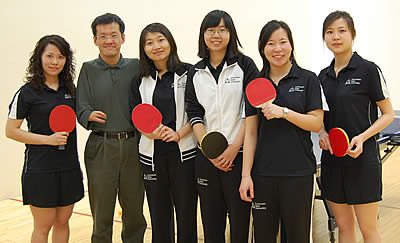 Two members of the five-person team, Liuzhen Zheng of Richton Park and Yi Chen of Park Forest, won third and fourth place in the Region 8 Women Singles Competition of the Association of College Unions International held at the University of Illinois – Chicago in February. Their placements qualified them for the singles completion at the National Championship in April.

“Given that the table tennis team started less than a year ago with just one table available for practice and with limited coaching, our women players have indeed accomplished so much,” said team coach Dr. T.J. Wang, associate professor of accounting at GSU. “Our women players have placed GSU on the map at the national level.”

The GSU Women’s Table Tennis Team, ranked 23rd in the nation by the NCTTA, earned the invitation to compete at the national level after a strong showing at the 2009-2010 Upper Midwest Regional NCTTA Tournament at University of Wisconsin-Milwaukee on February 20.

Other members of the team include Xiaoke Yi of Crete, Xini Zhang of Hazel Crete, and Wenyi Liang of Richton Park. The women are enrolled in the MBA program at Governors State University and each is originally from GuangDong, China.

According to Yi Chen, captain of the women’s team, “Table Tennis is very popular in China. I played with friends just to have fun. We had no teams. Our coach, T.J., helped us improve and we compete now with the goal to win.”

Like Chen, Liuzhen Zheng played table tennis from a young age, “but I stopped to concentrate on my studies. Now I am playing and practicing a lot. I play with the guys so I am getting faster and good at smashing. Table tennis is a great sport and a good stress reliever.”

The team experience has been both fun and exciting for the women. “I was never on a team in China. We have been to many different schools and met so many people,” said Xiaoke Yi.

The team is hosting a public meet and greet on Thursday, April 1, from 11:30 a.m. to 1 p.m. and 5:30 to 7 p.m., in the Hall of Governors. They will offer tips on playing table tennis, pose for pictures, and screen a video of championship competition.