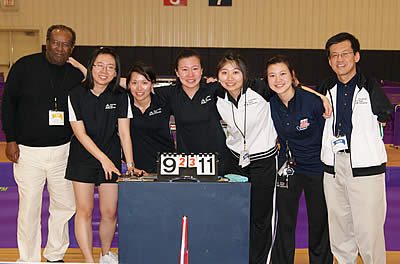 University Park, IL–(ENEWSPF)– In its first appearance in the National Collegiate Table Tennis Association (NCTTA) national championship competition, the Governors State University women’s table tennis team made its presence known both on and off the court. Among the 14 women’s teams participating in the April 10 and 11 competition, GSU had the lowest skill rating at the beginning of the competition, but that rating did not indicate how well the team would perform.

In the consolation round of matches, the GSU women’s team beat eleventh ranked Drexel University in intense singles and doubles competition. While the GSU women had never played doubles table tennis, they rose to the occasion, ultimately beating Drexel three matches to two. As one observer noted, the cheers of joy and excitement from the GSU women filled the gymnasium where the competitions were held.

When not competing themselves, GSU team members served as volunteers assisting the NCTTA as needed.

“I am very proud of what our women players have achieved at the 2010 NCTTA Championships,” said Dr. Wang who, in addition to coaching the team, is also an associate professor of accounting at GSU. “Their conduct and services have been commended by the NCTTA President as being leaders and role models to students from other schools. As the coach of our women players, I am very proud of their courage, spirit, self-discipline, and remarkable representation of the university.”