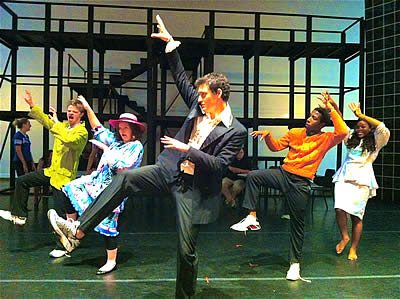 Cast members of GSU’s production of The Wedding Singer perform a high energy musical number for the show. (PHOTO SUPPLIED)

University Park, IL–(ENEWSPF)– A talented, youthful cast is putting the finishing touches on a high-voltage production of “The Wedding Singer,” this summer’s presentation by the Southland Area Theatre Ensemble (SLATE) at Governors State University.

“From start to finish, this is a show that’s filled with energy and enthusiasm,” said Charlie Lubeck, who plays Robbie, the title character in this musical version of the 1998 hit movie. “It helps that we have such a young ensemble – some cast members are as young as high school sophomores – because this production features nearly non-stop singing and dancing.”

Mandi Corrao plays Julia, a waitress who, like Robbie, is looking for love amid all the challenges to relationships in the 1980s.

“It’s a great show and anyone who loves to laugh should definitely come to see it,” said Corrao, a 2010 graduate of Lincoln-Way East High School. “The title and story line may be familiar but this show is special; the music, dance, and other small surprises that we add make it a completely unique experience.”

Thirty cast members from 20 communities, mostly in Chicago’s Southland, were chosen for The Wedding Singer following auditions in May. Lubeck and Corrao, like other cast members, are veterans of stage productions in their schools and local theatre companies.

Lubeck, of Flossmoor, appeared as Cinderella’s Prince in last year’s SLATE production, “Into the Woods”; a senior BFA major at the University of Illinois, he has appeared in productions of “How to Succeed in Business Without Really Trying,” “Hamlet,” “Titanic: A new Musical,” and other plays.

Corrao, of Mokena, has appeared in shows such as “Songs for a New World,” “The Sound of Music,” and “Meet Me in St. Louis.” Starting this fall, she will be attending Illinois Wesleyan University, where she plans to major in vocal performance.