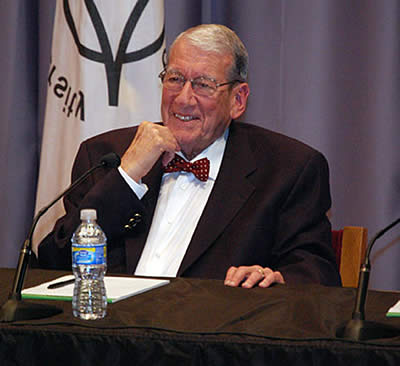 During his 15 years as GSU president, Dr. Goodman-Malamuth was instrumental in revising its curriculum, redesigning its colleges, and developing a new student grading system. Dr. Goodman-Malamuth reorganized the university’s administration, establishing the first office of Provost and Vice President of Academic Affairs.

Dr. Goodman-Malamuth was an early supporter of GSU’s Center for Performing Arts, a cultural jewel in the Chicago Southland. He commissioned several works of art for the nationally-renowned Nathan Manilow Sculpture Park. He helped establish the GSU Foundation, the university’s fund-raising arm. Dr. Goodman-Malamuth expanded GSU’s use of communications technology, especially through the use of telecourses that were transmitted all around the United States.

“He was an excellent president who brought a feeling of community and spirit to GSU,” said Dr. David Curtis, who worked with Dr. Goodman-Malamuth for many years as an administrator. “I loved the man.”

“He was the president who took the most steps to move GSU into the mainstream of higher education,” Dr. Curtis said. “When he arrived on campus, he saw that changes were needed.” It took a few years until all the changes were in effect, Curtis said, but Dr. Goodman-Malamuth was a “constant presence,” who made sure GSU was headed in the right direction.

“I felt that here was a place that had a tremendously bright future,” Dr. Goodman-Malamuth said about GSU in 1991. “I decided to come here to see if I couldn’t in some way help move (GSU) along with the faculty and staff … to help the university attain some of its aspirations.”

President Maimon recalls a phone conversation with Dr. Goodman-Malamuth, informing him that GSU received the necessary approval to admit freshman in 2014. “Leo was thrilled. He understood in a fundamental way that GSU was continuing the forward movement that he had

championed during his tenure at GSU. That phone call remains a special memory for me.”

In December, 1994, the GSU Foundation Board of Directors approved the Leo and Margaret Goodman-Malamuth Endowed Scholarship in Media Communications Technologies. Most of the funds for this scholarship were donated by Dr. and Mrs. Goodman-Malamuth during his tenure as GSU president. Additional funding was contributed to the endowment at the time of Margaret’s death in 1993, with contributions made in love and respect by university faculty and staff, and by friends from throughout the region.

No funeral or memorial service is planned for Dr. Goodman-Malamuth at this time. His family said that a celebration of life in his honor will take place later this year on a date to be determined.