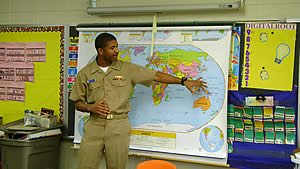 Park Forest, IL–(ENEWSPF)– Lt. Brandon Summerville of the U.S. Navy visited Amanda Godin’s class at Indiana School in Park Forest to speak to the students about his experiences. Lt. Summerville is the cousin of Indya Gettings in Mrs. Godin’s 4th grade class.

He is stationed in Japan and works in the area on a Navy ship. Previously, Lt. Summerville was a fighter pilot. He told the class about life in Asia, the places he has visited, the purposes of the Navy ship he works on and the differences in the culture and customs of Asia. The class is working on a year-long unit of study on Asia. Indiana School is in Matteson School District 162.