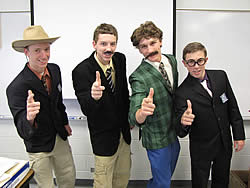 Dressing up as during Marian Catholic’s Spirit Week, from left to right, Packey Daley as Champ Kid, Jason Keane as Brian Fontana, Josh Pieper as Ron Burgandy, and Jay Hochstetler as Brick Tambland. All are characters from the movie Anchorman – The Legend of Ron Burgundy)

Chicago Heights, IL–(ENEWSPF)– While serving with the American Field Service as an ambulance driver during World War II in India and Burma , American playwright John Patrick contemplated the idea of a play based on his experiences. On the ship sailing back home to America , Patrick began writingThe Hasty Heart,the story of a dying Scottish soldier in a Burmese convalescent hospital, and the attempts of a nurse and the other patients in the ward who try to break through his hard shell and connect with him.

In Marian Catholic High School ‘s production of this play on Oct. 16-18, Lachlan , the rugged Scotsman, is played by Conor Keane, and Sister Margaret, his nurse, is portrayed by Jaime Patriarca. Colonel "Cobwebs," the medical officer who orders Sister Margaret not to tell Lachlan that his one good kidney is failing is played by Kieran Dziallo. Rounding out the cast are the English Tommy (Kyle Habben), Yank, an American (Adam King), Digger, an Australian (Michael Irwin) and Blossom (Jaboukie Young-White), a Basuto native.

The production is directed by Mark Donaway and Tom Sweeney , with set design by Don Calgaro and costume design by Val Struder. Maureen Kelly is the dialect coach.

The Hasty Heartwill be performed on Friday-Saturday,Oct. 16-17 at 7:30 p.m. with a Sunday, Oct. 18 matinee at 2 p.m. All performances are held at Marian’s Croarkin Theatre, at the intersection of Joe Orr Road and Ashland Avenue in Chicago Heights .

Tickets are $12 for the public, and $10 for students and seniors age 65 and over. Tickets are available at the box office and more information may be obtained by calling Marian Catholic at 708-755-7565.