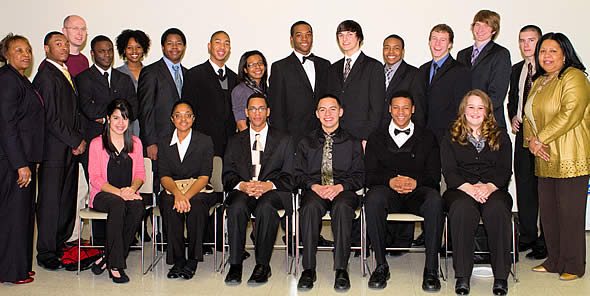 Chicago Heights, IL–(ENEWSPF)– The Sixth Municipal District Court of the Circuit Court of Cook County (located at the courthouse in Markham) held its second annual Mock Trial Competition in February. For the second straight year, Marian Catholic High School won first place. With seven of the eight members competing for the first time, the team displayed an excellent understanding of both the facts and the law of the fictional arson case during the two opening rounds of competition and the championship round. As one evaluator put it, "they seemed like a little law firm." The winning team included the following Marian Catholic students:  Julian Chavolla, Zachary Henry, William Hilger, Paul Jones II, Daryl Pugh II, Mary Skurka, Matthew Wilk and Trevor Woolfolk.

Pugh, who dazzled judges at last year’s competition, did not disappoint as the leader of the squad. His cross-examinations of the other sides’ witnesses were a highlight of the day. Skurka laid the foundation in each round with her concise opening statements. Wilk provided the knockout punch in each round with his forceful closing arguments. Chavolla, Henry, Jones and Woolfolk performed direct examinations and acted as witnesses. Each one of the four had great knowledge of the facts, and a commanding presence in the courtroom. Hilger acted as the bailiff and timekeeper for the team. For their efforts, each student was awarded a $5000 partial tuition waiver to John Marshall Law School.

Last year, Marian brought only one team to the competition. This year, the school was able to bring a second team. That roster included the following students:  Dillon Domke, Steven Jackson, Vincent Jones, Xavier Kirkham, Julian Love, Kayla Robinson, Clyde Stansbury, Gabriela Valedon and Gabrielle Young.  The team performed extremely well in the two opening rounds of the competition. With only two seniors, this team will help provide experience for next year’s squad.