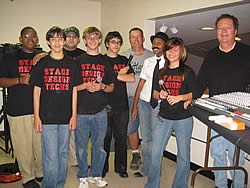 Chicago Heights, IL–(ENEWSPF)– Fulfilling a priority of last year’s Marian Fund appeal, Marian Catholic High School recently completed renovations to the Monsignor Croarkin Auditorium on campus. Having hosted hundreds of theater productions, choral concerts, school assemblies, and presentations both public and private since its construction in the early 1970’s, the theater sound system was due for an upgrade.

Jim MacDonald, uncle of Marian alumni Matt Nix ’07 and Lauren Nix ’09, had attended an event in the theater and had difficulty hearing the program, and immediately offered his services. MacDonald has worked as an audio engineer most of his adult life, most recently for NBC5 Chicago.

MacDonald proposed to upgrade the 432 seat theater with sound reinforcement equipment, notably new speakers, a state of the art sound board, and new wiring throughout. New hand-held wireless microphones and personal lavaliere microphones were tied into the system along with a cd player for sound effects or music.

“From seminars to musicals, every person seated in the theater should hear even the slightest nuances of voice and sound,” said MacDonald. “I am very pleased with the outcome of this project, and am excited to train the faculty, staff and stage techs how to best utilize the system.”

MacDonald has begun training key personnel and several students on the basics of the new system, and plans to make a more extensive training dvd this fall. As another example of the Marian Community’s “get it done” culture, future productions and presentations will be enhanced as a result of Jim MacDonald’s expertise and commitment.