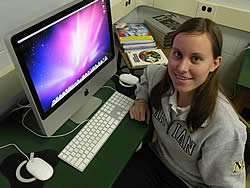 Laura Jansen ’11 worked on her award-winning video in the computer lab at Marian Catholic. (PHOTO SUPPLIED)

Chicago Heights, IL–(ENEWSPF)– The Intercommunity Peace & Justice Center of Seattle, WA sponsored the Just Video Contest for high school juniors and seniors. Entrants were required to produce a 4-6 minute video on one of three topics; Immigration, Human Trafficking, or Water as a Human Right. The Intercommunity Peace & Justice Center promotes just structures in our Church and world. They are sponsored by 16 religious communities and collaborate with Catholic, ecumenical, interfaith and other groups in carrying out their mission.

Laura Jansen, a Marian Catholic junior from Homewood, learned of the contest just a week and a half before the Feb. 1 deadline.

“I put together a storyboard using the topic ‘Water as a Human Right,’” Jansen explained. She then recruited four of her classmates, Brittany Marinas (Flossmoor), Kalila Harris (Hazel Crest), Mandi Clapperton (Park Forest) and Miloni Hernandez (Steger) as actors in the video titled “Water Realities.”

“I edited the video at home and made the accompanying music on one of the iMacs at school,” said Jansen, who earned first place honors.

“This was the first time we have encouraged a student to enter a video contest since we began the video class at Marian in 2007,” said Video Editing teacher, Sean Scanlon. “When Mrs. Carlasare (another Marian Video Editing teacher) and I came across the entry form, we immediately thought of Laura, who had been in our first semester class. Laura’s editing skills and her creativity helped her to produce some of the best student videos since the class has been offered.”

Winning videos can be viewed from the Intercommunity Peace & Justice Center’s website, www.ipjc.org.

Jansen’s next project will be assisting the South Holland Fire Department as they create a tribute to a child they had supported through St. Baldrick’s.