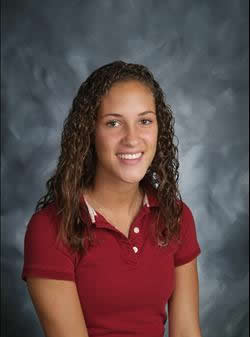 The Marian Catholic High School Community grieves the loss of Paige Kuersten, who died Saturday evening as a result of a recent automobile accident. Our deepest sympathy and prayerful support go out to the family of Paige and to all those who love her.

More about Paige from the Post-Tribune:

To her large, extended family and friends, Paige Kuersten was positive, fun, nurturing, and the perfect party planner.

Kuersten, 16, a Dyer resident, who would have been a junior at Marian Catholic High School this fall, died Saturday night at Christ Medical Center, Oak Lawn, Ill., from brain injuries she suffered in a two-vehicle accident May 31, family members said.

Kuersten was the passenger in a 2003 Chevrolet Silverado, driven by her boyfriend Austin Konieczka, 16, of Chicago Heights, Ill., that was struck by another vehicle on a rain-slicked highway on Sauk Trail in unincorporated Cook County, Ill., the Cook County Sheriff’s Department had reported.

The passengers of the other vehicle were hospitalized for injuries. Konieczka was not seriously injured. A spokesman said Sunday the accident was still under investigation.

Kuersten’s Aunt Jeanne Zomparelli of Schererville, who was at the Kuersten family home Sunday night, said information was likely pending since her niece’s parents decided to donate their daughter’s organs through the Gift of Hope Organ and Tissue Donor Network.

“She was the kind of young lady who was always spunky, energetic and a positive ray of life,” Zomparelli said of her niece, who attended elementary school at Infant Jesus of Prague in Flossmoor, Kahler Middle School in Dyer, and her freshman year at Lake Central High School in St. John before transferring to Marian Catholic in Chicago Heights.

Both St. Joseph Church, in Dyer, where Kuersten was a member, and Infant Jesus of Prague Church, in Flossmoor, offered special prayers for Kuersten on Sunday.

When Kuersten needed brain surgery following the accident several male classmates shaved their heads, painted her name on their chests and sent her the picture in the hospital, Zomparelli said.

More from the Post-Tribune.

Details of the accident from the Southtown Star:

A Dyer, Ind., girl was hospitalized in critical condition today after what was intended as a fun evening took a tragic turn for the worse.

Paige Kuersten, 16, suffered brain injures in a two-vehicle crash during a downpour about 2 p.m. Monday on Sauk Trail in unincorporated Cook County.

Kuersten was injured when the 2003 Chevrolet Silverado driven by her boyfriend, Austin Konieczka, 16, of Chicago Heights, was hit by another vehicle, Patterson said.

Konieczka had picked up Kuersten at her home in Dyer and was taking her to his grandparents’ home in Steger to watch Monday night’s Blackhawks Stanley Cup Final game on TV, Patterson said.

More from the Star here.