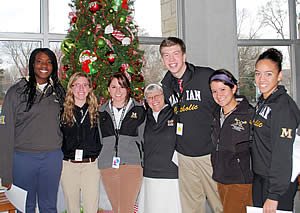 Chicago Heights, IL–(ENEWSPF)– Marian Catholic High School will open its doors to prospective students and families with its annual Open House on Sunday, Dec. 5 from 11 a.m. to 2 p.m.

The event will feature tours, displays and plenty of informational literature to familiarize families with the quality, college preparatory education that Marian offers to students from more than 72 zip codes in Chicago, its South and Southwest Suburbs, and Northwest Indiana.

Excellence is demonstrated in both men’s and women’s athletics, including recent achievements: women’s golf, men’s and women’s tennis, and swimming all competed in IHSA State championships; women’s basketball has made seven IHSA Elite Eight appearances in the last nine years; The 2009-10 year also featured a repeating IHSA individual state champion in men’s track. Coaches and members of athletic teams will be available.

For those interested in the Fine Arts, the 7-time Bands of America Grand National Champion Marching Spartans will show a video of the 2010 performance which earned them a 31st consecutive state championship in class and seventh place at Grand Nationals this fall; the madrigal choir and Forensic (Speech) team will also be performing at various times during the Open House. Following an IHSA state champion in Radio Speaking in 2007 and Performance in the Round in 2008, Marian captured another first at ISHA state in 2010 for Group Interpretation. The Art Department will have work on display from Art I through Art IV students.

Recruitment Director, Sr. Dorothy Marie, O.P. said, “If you want a school that will help you grow spiritually, help you develop leadership skills, give you the opportunity to participate in a wide range of extra-curricular activities, provide you with the opportunity to develop friendships that will last a lifetime while also giving you the opportunity to excel in academics, athletics, and fine arts, then Marian Catholic is the school for you! Come and experience Marian Catholic at our Open House on Dec. 5! Take our entrance exam on January 8 and be a part of the Marian Class of 2015!”