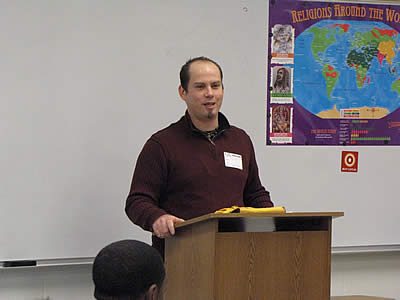 Chicago Heights, IL–(ENEWSPF)– Marian Catholic High School will open its doors to prospective students and families with its annual Open House on Sunday, Dec. 6 from 11 a.m. to 2 p.m.

The event will feature tours, displays and plenty of informational literature to familiarize families with the quality, college preparatory education that Marian offers to students from more than 70 zip codes in Chicago, its South and Southwest Suburbs, and Northwest Indiana.

Excellence is demonstrated in both men’s and women’s athletics, including recent achievements: women’s golf earned the IHSA Third Place Trophy in 2008 for its third Top 4 finish in a row; women’s basketball has made six IHSA Elite Eight appearances in the last eight years; men’s lacrosse finished second in the state last year and men’s basketball reached the Sweet 16. The 2008-09 year also featured IHSA individual state champions in wrestling and men’s track. Marian has also had a three-time state champion in the triple jump and an unprecedented state champion in both men’s and women’s pole vault in 2007. Coaches and members of athletic teams will be available.

For those interested in the Fine Arts, the Marian Catholic 7-time Bands of America Grand National Champion and Tournament of Roses Parade®-bound (2010) Marching Band will show a video of the 2009 performance that earned it a 30th consecutive state championship in class and third place at Grand Nationals this fall; the madrigal choir and state caliber Forensic (Speech) team will also be performing at various times during the Open House. Following an IHSA state champion in Radio Speaking in 2007 and Performance in the Round in 2008, Marian captured second at ISHA state in 2009 for Group Interpretation. The Art Department will have work on display from Art I through Art IV students.

Also on display will be more than 40 clubs and organizations: Student Council, Service Club (98% of students are voluntarily involved in service), Equestrian Club, Model United Nations, Astronomy Club and many more. Parent groups from Mother’s Club to Band Parent Association will describe parental support and involvement.

Recruitment Director, Sr. Dorothy Marie, O.P. said, “If you want a school that will help you grow spiritually, help you develop leadership skills, give you the opportunity to participate in a wide range of extra-curricular activities, provide you with the opportunity to develop friendships that will last a lifetime while also giving you the opportunity to excel in academics, athletics, and fine arts, then Marian Catholic is the school for you! Come and experience Marian Catholic at our Open House on Dec. 6! Take our entrance exam on January 9 and be a part of the Marian Class of 2014!”