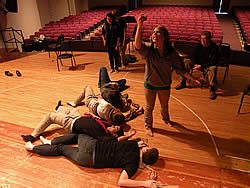 Members of the Marian Catholic Performance in the Round group rehearse after school while coach Mark Donaway looks on. The team heads to Peoria on Thursday to compete in the IHSA State Championship. (PHOTO SUPPLIED)

Second-place sectional finishers included Adam King (Lansing) and Mollyanne Nunn (Crete) in Dramatic Duet Acting, and Zach Henry (Lansing) and King in Humorous Duet Acting. Marian earned third-place points with Wlos in Impromptu Speaking and with its Performance in the Round.