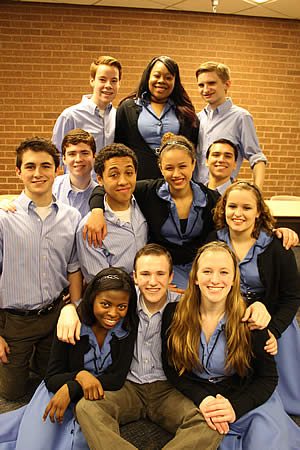 The twelve-member cast had won the Sectional title the week before and entered into State competition bolstered by intense rehearsals and last-minute fine tuning of the show.

“We spent so much time together practicing that we became like a real family trying to reach a common goal,” said Courtneigh Summerrise, a senior on the team.

Coach Mark Donaway was awed by his team’s performance.

“Seldom is a coach lucky enough to have every single person in an ensemble cast give their best performance at the same time,” he said. “I knew each individual cast member was capable of performing at a higher level, but I never dreamed they’d all click at once. It was truly a highlight of my career to witness their performance.”

The judges were so impressed with Marian’s Group Interpretation presentation that all twelve members of the cast were named to the All-State Speech Team, an exceptional honor in addition to earning the State Championship trophy.