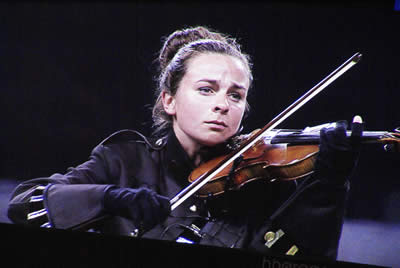 Chicago Heights, IL-(ENEWSPF)- Ellen Chmura, a junior at Marian Catholic, has taken every opportunity to enhance her music skills. The Lansing Illinois resident was accepted by Music for All, a catalyst that creates life-changing experiences through music, to march in the Rose Bowl Parade in January; where she was able to interact with band directors and peers for around the country. Ellen also earned a Division One mark and Best in Room for French Horn and Violin at the IHSA Solo and Ensemble competition last month.

“Ellen is one of the finest musicians we have had in our program,” said Greg Bimm, Marian Catholic Band Director. “She is dedicated, organized, very consistent, and has a great work ethic.  It is the combination of talent and consistent practice that has made her such an outstanding performer.  Along with being a wonderful performer, Ellen is also a very dedicated band member and a strong leader.  She is definitely one of our go to people.”

Ellen hesitated to join band when she was an incoming freshman; however, after a phone call from Greg Bimm she decided to become a part of one of the finest high school band programs in the nation.

“My favorite part about music is the feeling I get when I play, I can’t compare it to anything else in my life,” said Ellen. “Music has become more than just an activity for me; it’s a passion. Mr. [Greg] Bimm and Mr. [Bobby] Lambert both serve as my inspiration to study music in college.”

The Marian Catholic Band Program has a reputation as one of the outstanding concert and marching bands in the United States. Over the last 30 years the bands have earned hundreds of awards and honors.

In the State of Illinois Marching Band Championships, Marian is undefeated in its class since 1980. This 33-year undefeated streak at State is unprecedented in any arena. The Spartans have also won seven overall state titles. In Bands of America Competition, the Marian bands have been named Summer National Champion five times.