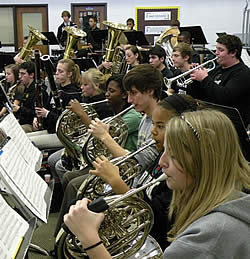 30th Annual State of the Art slated for February 20

Twenty bands are scheduled to compete in three classifications determined by the difficulty of musical selections and whether the band has won in its classification three consecutive years.

Competing bands perform two selections of their choice, usually a march and an overture or suite, and are judged on nine elements of musical performance.

Marian Catholic is in its second year of a three-year hosting cycle.

“It’s a really great event,” said Marian Director of Bands, Greg Bimm. “We get to interact with our Catholic school colleagues and have the opportunity to hear other bands perform.”

“Catholic school band programs have a lot to overcome,” said Redford, who managed the event for 12 years before entering the public school arena. “Programs are generally under-funded, under-staffed, and under-equipped. State of the Art is a forum where Catholic school bands can compete with the resources they have. The credit goes to the students who work so hard, yet cheer enthusiastically for everyone who participates.”

Redford was asked to be one of the judges for the 30th annual event.

“I’m honored to be a guest judge at the 30th State of the Art,” he said. “I’m thrilled that the event is still going strong.”

Band performances will begin at 8:50 a.m. on Saturday, February 20, run throughout the day, and culminate with an awards ceremony at 6:30 p.m. where Bishop Joseph N. Perry, Auxiliary Bishop of the Archdiocese of Chicago, Vicar for Vicariate VI, will be the guest speaker.

Admission is $6 for adults and $5 for senior citizens and elementary school students. Parking is free and concessions will be available.