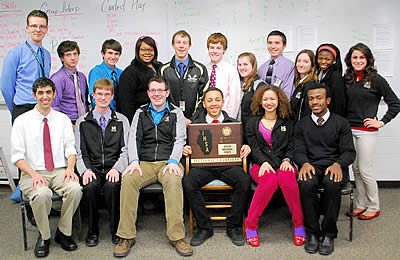 Wlos, Young-White, Keane, and the duo of Jackson-Riddle win titles

Dramatic Duet Acting (DDA): Kiayla Jackson and Lamar Riddle, 1st. DDA is an eight minute scene from a published work performed by two people with the optional props of a table and/or two chairs, and demonstrates the actors’ abilities to handle serious, dramatic material.

Extemporaneous Speaking: Joe Wlos, 2nd. Extemp is an event in which a student is given forty-five minutes to prepare an original, six-minute speech indicating his/her knowledge of current events concerning an assigned topic.

Humorous Duet Acting (HDA): Adam King and Kiayla Jackson, 3rd. HDA is an eight-minute scene from a published work performed by two people with the optional props of a table and/or two chairs, and demonstrates the actors’ abilities to handle comedic material.

Performance in the Round (PIR): “I never promised you a Rose Garden” 3rd. Molly Dettmann, Bernadette Senick, Michael Irwin, Kyle Fitzgerald, Al Gallinaro, Courtneigh Summerrise, Kyliah Thompson, Shayna Vaughn, Kieran Dziallo, and Cooper Packard. PIR is an event offered only during the state run in February and is a fifteen-minute performance of three or more performers of an original or published work, where the performance takes place in a sixteen-foot diameter circle.

Prose Reading: Adam King, 3rd. Prose Reading is an eight-minute oral presentation of prose literature in which a performer reads from a small black binder his or her version of a published piece.

Radio Speaking: Summer Fields, 3rd. Radio Speaking is a limited preparation event in which a performer is given a fifteen-minute radio script to cut down to five minutes. The performer has forty-five minutes to cut and prepare the script with an included commercial, and the final performance must time between 4:50 and 5:05 minutes.

Special Occasion Speaking (SOS): Conor Keane, 1st. SOS is an eight-minute speech which is the original work of the student, speaking as himself at his current age in a realistic situation for the purpose of entertaining an audience.