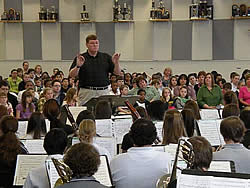 Greg Bimm, director of bands at Marian Catholic for over thirty years, explained to the youngsters how the symphonic band warms up every day.

“They run through the scales, which are vitally important to learn and practice,” he said. “Once you learn the scales, you can manage nearly anything that appears on the score.”

After tuning, and some vocal and instrumental sight-reading, the symphonic band was ready to play for the young crowd, all students of Catholic grade school band director, Bill Gula.

“Exposure to the hard work and dedication of the Marian band students is terrific for my young musicians,” Gula explained. “It is extremely important for grade school music programs to provide a good foundation to students so they can become talented high school musicians.”

He is proud of the Marian musicians who were once under his direction.

Patricia Gornick, a senior flautist who attended St. Kieran, agrees that an early foundation in music, along continued practice, is essential to becoming a successful band member at Marian.

“Mr. Gula gave us the opportunity to participate in solo and ensemble contests, which helped us prepare for being a member of a highly competitive band like Marian’s,” Gornick said.

“We were well prepared by the time we finished eighth grade,” they said. “That helped our transition into the Marian band program and its leadership structure.”

The Marian Catholic Marching Band has earned Illinois State Championship honors in their class thirty years in a row, and marched in the 2010 Tournament of Roses Parade in Pasadena, CA on New Year’s Day. The Marching Spartans have won the Bands of America Grand National Championship an unprecedented seven times.