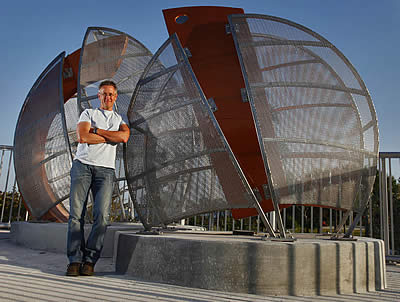 University Park, IL–(ENEWSPF)– The board of Governors State University’s Nathan Manilow Sculpture Park (NMSP) works hard to build interest in the park throughout Chicagoland region. NMSP board member Bob Emser’s reach extends well beyond the region as he develops his career in the art world.

Emser is a professional sculptor who recently received a prestigious Pollock-Krasner Foundation grant for support of his career.

The Pollock-Krasner Foundation grant is awarded annually to artists whose work demonstrates significant promise and who have financial need. Over $2 million was awarded during the 2008-09 fiscal year by the foundation, which is named for Jackson Pollock and his artist/wife Lee Krasner, two pioneers of American abstract art.

“Bob’s intensity, drive, and focus are bringing him the recognition he deserves,” said Geoffrey Bates, Director and Curator of the Nathan Manilow Sculpture Park. “His work on behalf of the NMSP has been tireless and we, at the park, are both proud and excited to be able to name him as one of our founding board members.”

Emser is currently exhibiting his work in “Encounters,” an exhibition of sculpture sited on Governor’s Island in New York harbor (through October 12), and recently completed a major commission for the city of Bellaire Bluffs, Florida.