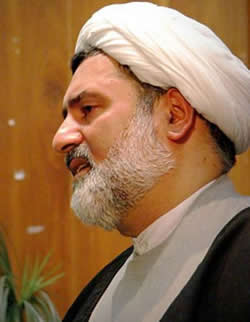 Chicago, IL–(ENEWSPF)–Ayatollah Mohsen Kadivar, an internationally noted progressive critic of Iran’s theocratic government who was once imprisoned for his views, will discuss the fallout of this year’s tumultuous election at DePaul University on Oct. 30.

Kadivar’s talk, titled "Political Islam and Democracy in the Aftermath of Iranian Elections," will be held from 1 to 3 p.m. at the DePaul Student Center, 2250 N. Sheffield Ave., Chicago, Room 120. It is free and open to the public.

A former engineering student revolutionary during the reign of the shah, Mohsen Kadivar later joined a seminary where he graduated as a "source of emulation" accrediting him as a senior Shi’a clerical scholar. Simultaneously, he obtained his doctorate in philosophy and divinities and joined the faculty of Tehran’s Tarbiyat Modaress University. Kadivar has authored several books, including "Political Thought in Islam" and "Islam and Human Rights" which posed theological challenges to the political legitimacy of the Iran’s ruling theocracy. His writings, which attracted a large and passionate following in Iran, resulted in his imprisonment for 18 months in 1997 and eight years later expulsion from his academic post in Iran by the administration of President Mahmoud Ahmadinejad. Kadivar currently is a visiting professor of divinity at Duke University.

Kadivar has argued that Iran’s ruling clerical elite have misappropriated the teachings of Islam to accrue power, and he has attempted to reconcile Islamic teachings with democratic political theory and practice. He also has expounded on how Islam forbids terrorism and been a strong advocate for women’s rights under Islam.

"At this critical moment in Iran’s long and troubled history, Ayatollah Kadivar’s talk will be of tremendous interest to all who are concerned with the future of the country and the Middle East region," said Kaveh Ehsani, assistant professor of international studies, whose department is co-sponsoring the program.