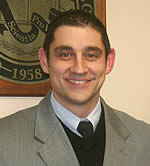 Chicago Heights, IL–(ENEWSPF)– Just ask any of Dave Naze’s students about the impact he has made on them, and they’ll immediately light up and provide glowing comments. The Prairie State College (PSC) professor of communication has touched hundreds of students as an instructor in the classroom, as a coach of the college’s forensics team, and the director of a summer speech camp for high school students.

For his dedication to teaching, Naze recently received the Outstanding Young Teacher Award at the annual Illinois Speech and Theatre Association Conference (ISTA). The ISTA is a professional organization made up of Illinois high school, community college, and universities speech and theatre professors. Naze was nominated for the award by a teacher at a local high school.

“His contributions to the ISTA organization and his commitment to the college and to students in the classroom and on the forensics team led to his nomination and ultimately his winning the award – he is truly a deserving recipient,” said Elighie Wilson, professor of communication at PSC. “I am proud to call him a colleague, and I am glad that he has made PSC his professional home.”

The award was presented to Naze by Judy Santacaterina, director of bachelor of general studies baccalaureate degree program at Northern Illinois University (NIU) and director of individual events, NIU forensics. Santacaterina was Naze’s mentor and coach when he was a student at NIU. She said she always new Naze would be a successful teacher and mentor for his own students.

“Dave challenges students and encourages them to think, argue, and communicate,” said Santacaterina. “He recognizes talent and allows students to cultivate that talent. I think part of his success is due to his undaunting positive attitude and his very patient yet effective demeanor. He is the quintessential motivator.”

Thaddaeus Carr II agrees with Santacaterina that Naze is a motivator. Carr graduated from PSC last spring and was a member of the forensics team that won the college’s first ever national championship. Carr followed in Naze’s footsteps and is a student at NIU, competing on the Forensics team. He credits Naze for helping him discover himself.

“Dave has an unyielding passion for his work, and has a deeply rooted gift for helping others. He recognized the hidden potential in me to mold myself into a better individual,” said Carr. “I am very thankful to have met him, because I now have the confidence and drive to teach others the lessons he taught me. I can honestly say that he changed my life for the better, and for that I couldn’t thank him enough.”

Naze has been a professor of communication at PSC since 2006.