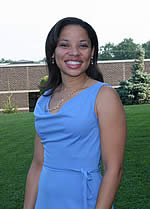 Chicago Heights, IL–(ENEWSPF)–When Prairie State College (PSC) alumna Kim Godboldt was in high school, she decided that she wanted to be a physician to follow in both of her parents footsteps. With her baby daughter in tow, she began her college career at the University of Miami to major in biology.

As a biology major, Godboldt was disappointed in her courses, and decided to change her major.

"I must have changed my major at least five or six times before I realized that I was really taking general education credits before I got to the core of the program," said Goldboldt.

After spending a few more semesters at the University of Miami, Godboldt came home, still undecided on what career path to pursue. She began working in her mothers office as a medical biller.

"I was good at what I did, but I was tired of spending the day at the computer," said Goldboldt. "I mentioned to my grandma that rather than being a physician, I should go into nursing. She discouraged me because both of my parents were doctors."

A few more years passed, and Goldboldt was still working at her mothers office. One day, she helped the nurses with a young boy who didnt want his shots. It was that moment that she decided to follow her heartpursue a career as a nurse.

Godboldt enrolled in PSCs nursing program in 2008 when her youngest son was two-weeks old and never looked back. The mother of four went to class and clinicals during the day, and took care of her family and did homework at night. She credits the PSC faculty with helping her realize her dream.

All the PSC nursing faculty were amazing, and they really encouraged me as a student, said Godboldt. I loved my Prairie State College experience.

Although she is still looking for a full-time nursing job, Godboldt is happy because she focused on what makes her happynursing. She fills in as a nurse in her mothers office when she is needed.

Godboldt hopes to work at the hospitals where she did many of her clinicals. Her long-term career goal is to guide students on their career path and teach nursing at PSC.

Prairie State College means so much to me because the faculty mentored me, said Godboldt. I would love to mentor other nursing students and give them the same quality education that I received.