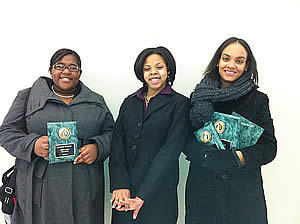 Kelli Campbell, of Homewood, also placed at the tournament. She received third place in Persuasive Speaking.

Also competing at the tournament was Adrianna Carr, of Park Forest.

“It was nice to come out of winter break and start off the second half of the season with big improvements," said Dave Naze, associate professor, communication, and co-director of the Forensics program. “We look forward to the rest of the season.”