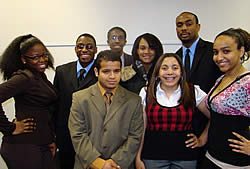 Chicago Heights, IL–(ENEWSPF)– The Prairie State College (PSC) Speech Team is racking up the medals this season. With the season halfway finished, the team recently added another 12 medals to its growing collection.

At the Highland Community College Tournament, the team received a fifth place overall award with Clanton named tournament champion in persuasion and Roman named tournament champion in program oral interpretation. Etta Oben, of Matteson, received a fourth place in impromptu speaking while sixth place wins were achieved by Redley in persuasion and Sigers in Poetry Interpretation.

Other students competing in the tournaments included Jimmie Johnson, of Matteson, and Sydney Milligan, of Olympia Fields.

The team is coached by professors of communication Ed Schwarz, Elighie Wilson, and David Naze.

“We are off to a pretty good start to the second half of the season,” said Naze. “Now we are ready to gear up for the home stretch as we look forward to the post-season tournaments.”

The team’s next tournament is at Harper College.

Previous articlePSC To Host Artwork Of Area High School Students
Next articleGingrich: The ‘Radical Left Is A Secular, Socialist Machine’ That Will Destroy America (Video)