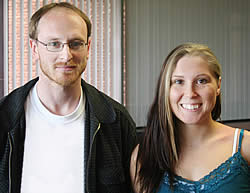 Chicago Heights, IL–(ENEWSPF)– An apple a day turned out to be more than just a healthy habit for Prairie State College (PSC) student Heather Carr.

Carr and Kallend’s award-winning project focused on the rotational inertia of rigid objects. An apple was the inspiration for the project.

“I was spinning an apple on my desk when we came up with the project,” said Carr, of Chicago Heights. “We had to come up with a concept, prove it, and draw a final conclusion.”

Posters were evaluated on the participant’s ability to use the process of science, as well as rational and logical thinking to answer a question about the natural world.

“We calculated the center of mass for the apple and created a general formula that could apply to other objects,” said Kallend, of Glenwood.

“Both Heather and Peter are in the top 5 percent of their physics classes and are active, attentive, hard-working, and excellent students,” said Mohammad Salami, associate professor of physics at PSC. “Their enthusiasm for physics was rewarded by the judges with a second place win.”