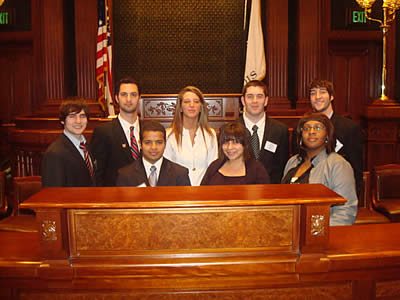 University Park, IL–(ENEWSPF)– Prairie State College student Jeremias Roman wants to be a lawyer, and he just added some good experience to his résumé. Roman, along with 250 students from more than 20 colleges and universities in Illinois, recently took part in the annual statewide simulation of the Illinois General Assembly.

Through Model Illinois Government (MIG) students hold various roles including legislators, lobbyists, journalists, attorneys, and leadership positions within the parties and committees. Students were assigned political parties and placed in committees of their particular interests.

Roman held a representative position and debated issues such as the death penalty and the right to bear firearms.

“MIG was an incredible experience because I got to meet new people and debate in the Capitol,” said Roman, of Glenwood. “It was the kind of education that I couldn’t get in the classroom.”

As president of PSC’s Political Science Club and a second year student at MIG, Michael Baratta, of Homewood, knew that MIG would be a great experience. His first year he served as a representative, but this year he took on a more active role as a Whip.

“Taking on a leadership role at MIG was thrilling and made my experience even more valuable,” said Baratta.

“I learned how much having a voice matters,” said Swanson. “The entire experience helped me understand how our government works.”