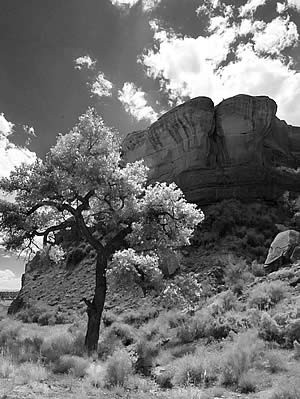 Chicago Heights, IL–(ENEWSPF)– Every summer Prairie State College (PSC) photography student Leonard Ferris takes a motorcycle road trip. Last summer, while traveling up Highway 192 in Utah, he stopped at anything that caught his attention and took a photo. There was one structure that caught his interest immediately. That structure earned him an Honorable Mention in Twenty-Four Maximum, the next art exhibit in the college’s Christopher Art Gallery.

The exhibit runs from February 14 through March 9. An artist’s reception and awards ceremony is scheduled for Thursday, February 17 from 4:30 to 7:30 p.m. The exhibit is juried by William Lieberman, owner/director Zolla/Lieberman Gallery in Chicago.

“The landscape itself was so vast (the mountains in the background were at least 20 miles away) it made me feel small in the face of creation,” said Ferris, of Calumet City. “This was a place to rest, reflect, and use my camera to remember.”

Ferris has been featured in numerous other exhibits at the college including being named the college’s Photographer of the Year in 2009.

“To have someone show an appreciation for my images is a boost to my spirit no matter what the venue,” said Ferris.

Pam Eberlin, of Chicago Heights, is also no stranger to being featured in exhibits at the college. While this is her fourth show at the college, she’s been featured in hundreds regionally. Her work is currently on view at the Union Street Gallery, Art4Soul, Tall Grass in Park Forest, and South Shore Arts in Munster, Ind.

“I have always wanted to be an artist since I was little and would sell small drawings for 10 cents each to my parents and their friends,” said Eberlin.

Her passion for art earned her the Best of Show for her piece “Child’s Play.”

“I love vintage objects! I use found objects in all my work, but prefer to use vintage when I can and it works,” said Eberlin. “The vintage Chutes and Ladders board was so cute and reminded me of playing it many years ago with a friend on her farm in Itasca. So, I added other vintage toys and similar items to complete the idea of play.”

Also receiving honors at the exhibit is Susan Smith Trees, of Chicago, for her plastic and acrylic painting.

“All pieces in the annual juried exhibition provide an opportunity for artists from nine states to submit work for possible inclusion,” said Jan Bonavia, director, Christopher Art Gallery. “This year’s theme, ‘Twenty Maximum’, features a variety of mediums that are no larger than 24 inches by 24 inches.”

Hours for the Christopher Art Gallery are Monday through Thursday from 9 a.m. to 3 p.m., and Wednesday and Thursday from 5 to 7 p.m. The gallery also will be open before the concert through intermission during the 23rd annual Jazz Fest, Friday, February 18. Visits can be made by appointment. For more information about the exhibit, or to make an appointment for a visit, contact the Prairie State College Foundation at (708) 709-3636.