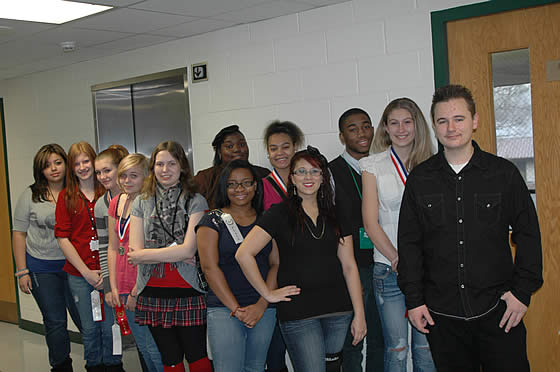 Park Forest, IL–(ENEWSPF)- It has been quoted by many that there is strength in numbers. That is so very true in the political world, in sports, in the financial sectors and in the business club at Rich East High School in Park Forest.

This year, the Rich East Business Professionals of America Club has had one of its best seasons in a long time. Over the years, there have always been solid groups of three of four who have helped make the club successful. This year, however, to use a cliché, the team has “rocketed” to success.

At the recent BPA sectional competition, the Rockets had five sectional champions, Moreover nearly all of entire team of 18 future business professionals placed. Thus, practically the entire team has qualified for the BPA State Competition, Feb. 23-25 in Oak Brook.

“I’m just so proud of all of them, the way they took charged and really helped each other,” said Bob Frederick, a long-time business education teacher and BPA sponsor/advisor at Rich East.

“It was great the way they all just took their natural talents and studied meticulously for their individual competitions.”

From the beginning, the team just seemed to click. Frederick said there are many reasons for that. The main two are the quality of the kids and his staff.

“We had just an outstanding freshman class, number one and our outstanding group of seniors,” Frederick said. “I also had a lot of assistance from my co-teachers, Mrs. (Krista) Wilcox and Mr. (Matt) Shank.”

One of those seniors who have been a mainstay of the team is Heather Adney. Adney, who has been a BPA star for all the last three years and is this year its president, has also qualified for nationals twice and is hoping for a third. Last year, she finished eight nationally in word processing. She is also an honor student third in her class with a GPA hovering near 4.0, and is a mainstay on the Rocket volleyball, bowling and softball teams.

Adney said since this was her last year, she really wanted to make it the best, for the team and herself by hitting some goals.

‘Since this is my last year, I wanted to make it special,” Adney said. “We recruited 17 new members which are more than we have had in the last three years, and now 13 of us are going to state. They have all worked very hard and I’m happy for and very proud of them.

“It’s been an amazing season,” Adney said. “Everyone has been practicing very hard and has placed well in area competitions. Out of the 18 members of Rich East BPA, 13 of us are going to state, it’s very exciting. Plus for the first time ever, we have even ordered Rich East BPA hoodies.”

“She has really gone out of her way to recruit and lead our team the past two years,” he said. “Our freshmen were in awe of her pictures and accomplishments posted on the BPA board room in Room 225.”

Another senior, (Cierra) Motley, in her second year on the Rocket BPA team,  has “also been a great influence,”  Frederick said.

One of the biggest and most pleasant surprises has been the success of the freshman on the team like Davila, Anna Farley, Kurnat, and Thompson.

“The freshmen have been amazing,” Adney said. Four of the six freshmen made it to state. They all practice everyday and their performance proves it.”

For Kurnat and Anna Farley, both of whom also run for the Rockets Girls Cross Country team, it seemed like a natural. They wanted to be active in activities that would help them academically and gain valuable business experience. Not only do the competitors have to act professionally, they have to walk the walk and dress the part. BPA allows them to develop business skills early on which will carry them forward. Kurnat has three friends who joined her on the Rich East BPA team.

“My teammates are wonderful and we all have great time learning. The business world is so competitive and professional,” Kurnat said. “I really like feeling like an adult and having that responsibility and working together is a plus, too. Helping each other out and just being functional as a team. The skills that I am learning now are definitely going to by used in the future.

“I also like shopping for new clothes,” Kurnat added with a grin.

Thompson, who was drawn to the team by her friend Kurnat, she was attracted to BPA not only by the competitiveness, but also the camaraderie and business sense and education and experience.

“We all help each other out by giving each other tips, studying together and quizzing each other,” Thompson said. “I like how mature most people are and how there is a mix of independent and group work, as well as the responsibility if gives you. I like dressing up and feeling mature and professional.

“The travel, the people you encounter, and the meets are fun, too!”

Some of those new senior recruits are Ashley Bates, Vanessa Guzman, Fatimah McMillar, Tyler Tichgellaar and Maggie Wagener. Motley and Kendal Watt are second-year seniors, all competing at the state BPA meet.

Crawford, a senior, joined BPA for the first time this year. She said it was a good experience and wished that she had joined the club sooner.

“I knew that it was going to be a valuable experience,” Crawford said. “I plan to work in the business world and this is a great opportunity to learn some business skills.”

So now as the Rich East BPA team goes to the next level, expectations high and with good reason. It is hoped that perhaps as many as a half dozen or more may go to nationals.

“Overall, I think we will do great,” Adney said. “Everyone has been practicing hard everyday. We should have a good group going to nationals. They know the competition like the back of their hands.”