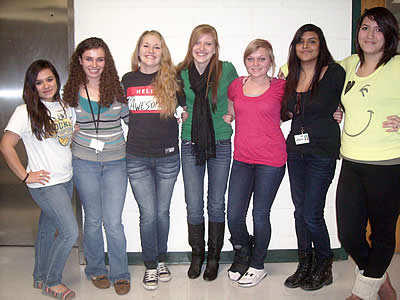 Park Forest, IL–(ENEWSPF)–The Rich East Business Professionals of America team has picked up where they left off last season with strong performances at the recent BPA Regional Competition at Robert Morris College in Orland Park.

“The kids really did a great job,” said longtime Rich East BPA sponsor Bob Frederick. “We have another great group of kids who are very intelligent, quick learners and love the competition. They represent Rocket Pride very well.

“Plus this is always such a great experience for them, as they gain an understanding about business and the business world. It is a great beginning for life-long learning skills, especially in business.”

Several members of this year’s team have returned from last year, who also were high medal-winners at the regional and state competition. Among these include Farley, Kurnat and Thompson, all of whom are sophomores and are in their second year on the team. Abbott, Dorantes and Terrazas are also sophomores and  Hernandez is a freshman.

They also all enjoy working as a team and enjoy the competition and helping each other succeed. It is seen as a tremendous business, educational and social experience.

“Business Professionals of America is a fantastic way for students to experience the business world and discover their strengths and weaknesses,” Thompson said. “You get to see new people and go to new places which is always a great thing. BPA is really just a bunch of fun!”

“BPA, for lack of better words, is amazing,” Farley said. “It not only prepares us for different career opportunities and gives us a better understanding or the corporate world, but also lets us communicate with many other students from around the state who have similar goals as our own.”

BPA is also considered a springboard for students as they begin their quest for success, whether that would be in business,

education and life. In many ways, all three seem to come together in

more ways than one.

“BPA has allowed me to meet new people and try new things,” said Kurnat. “Before BPA, I had no idea what I was going to do about my future. Now I have a lot of ideas and have learned skills that I otherwise wouldn’t posses. I am so grateful for BPA.”

The Rocket BPA  group also has four new rising stars this year who were drawn into the group not only for what is has to offer, but for the comraderie among their peers from across the school and across the miles.

“Two things I really like about BPA is the opportunity to meet new people who are interested in the same things as me, and how we get to become more involved with the way the world works as we grow older,” Hernandez said.

‘It (BPA) is just a great opportunity and fantastic outlet for those of us who want to explore our interests in business and may wish to pursue it as a career,” Terrazas said.

Added Dorantes: “Business Professionals of America is one of the best opportunities possible. It has given me multiple and rewarding experiences that will help me excel later in life.”

And finally from Abbott, another Rocket BPA newcomer: “BPA is a great club because it helps you learn something new, met new people and experience rewarding competition. If we make it to nationals, it will be the opportunity of a lifetime.”

The Rockets next major competition, enroute to nationals will be the state meet in Oak Brook in early March. From there, qualifiers would advance to nationals, this year in Orlando, Florida. The Rocket Business Professional of America team is coached by Bob Frederick.