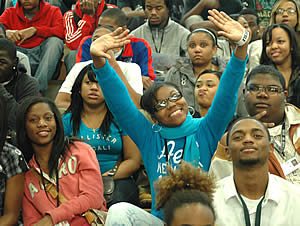 Rich East students show Rocket Pride and wave to the camera during a special assembly as the school is awarded a check of $20,000 from Verizon Wireless as a result of getting more than 36,000 votes in a nationwide Text2Win contest. (PHOTO SUPPLIED)

Through the Verizon Wireless Text2Win contest, students, parents, teachers and fans from select high schools were invited to send a text message to vote for their school. Rich East High School gained more than 36,000 votes in the competition against 11 other high schools in Illinois, Michigan, Missouri, and Ohio, including Rich Central High School and Rich South High School.

"You all worked very hard to get this honor," Mike Laneve, assistant principal for activities and athletics told the students during an all-school assembly last week.

Chicago Bears cornerback Tim Jennings also told the students that they should be proud of their recent accomplishment as well. "You should always find it in yourself to do your best in the classroom, in athletics in working hard to achieve success," Jennings told the crowd of more than 1,100 staff and attentive students. 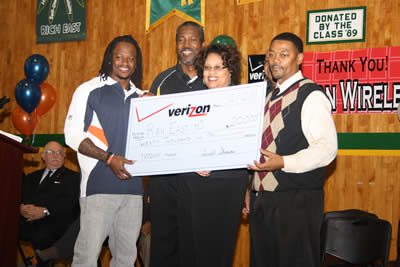