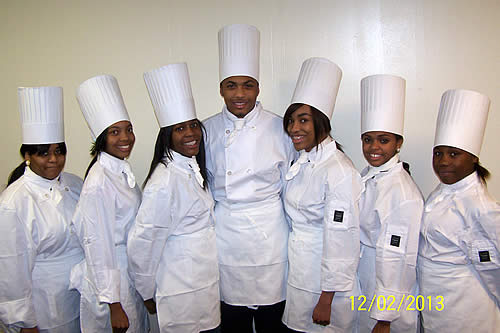 The prestigious competition, featuring almost a dozen schools, is sponsored by the Illinois Restaurant Association Educational Foundation, will be held at Kendall College Friday and Saturday, Feb. 22 and 23.

ProStart is a culinary and management class at Rich East High School and in Rich Township School District 227. Students learn about the art of cooking and restaurant management.

The Rocket culinary stars are Leanna Beeks, June Knox and Mirissa Martin. They have been working diligently throughout the school year, creating various meat, vegetable and pasta dishes and well as pastries and other confectionary sweets. Over the course of the school, several teachers and students were used as taste-testers and there were no complaints. It has become a fun skill that will give them a solid career.

“Everyone has really put a lot of work into this,” said Chef Mark Crawford, Rich East’s ProStart teacher. “They take it very seriously. They do so by learning how to cook everything from regular fantastic meals to deserts.”

In addition to cooking and creating foods that can be served at high-class four- and five-star restaurants, they also learn about restaurant management. They create business models and plans to have a successful career and business.

The Rocket team also came up with the name of their restaurant, “The Wild Flower Café.”

“They did this all on their own,” Crawford said. “It’s a pretty good name. They really enjoy what they are doing.”

“It’s a good plan,” Crawford said. “Hopefully it will receive some high marks.”

As part of Illinois Restaurant Associations’ commitment to Education, it also named Crawford the Illinois Culinary High School Educator of the Year for the second-straight year. 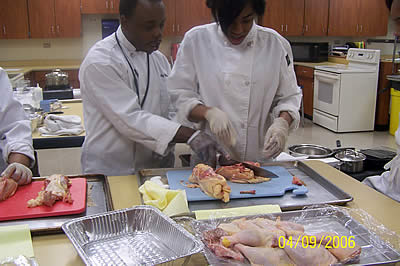 Presentation is also important in ProStart competition as well as the taste of the food, whether it is a desert or meat dish. (PHOTO SUPPLIED)